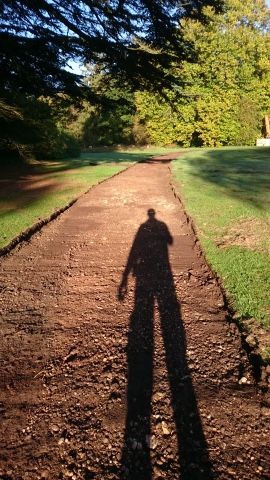 Chapel Bank: Arranged a little tidy last week, and more is needed, but the Verbena bonariensis is still flowering beautifully so I'm loathed to do anything just yet. The plants are knitting together really well now, but time will come to sort out what is and isn't working well - more of this to come.
West Lawn: Much has happened over the last month. Having to retain the wild flower area until the exhibition closed, as could have been expected, pushed us into poorer weather and so the hay cut was completed in less than ideal conditions. Too much herby growth was left in situ, which isn't great for wild flowers, so we flail mowed then Adam took to the worse areas with the trusty knapsack blower, collecting as much grassy debris as we could. It certainly smartened up the lawn, which is already greening nicely and the wild flowers now have a fighting chance. 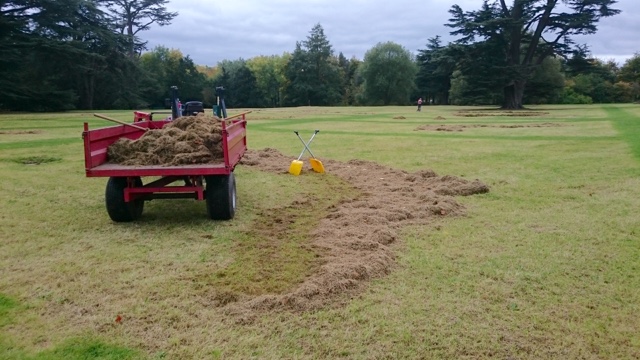 Elsewhere on the lawn, the hlf footpath contractors are busy cutting the path route, which is much easier said than done, but the devastation will repair, and the accessible paths which will give the area such a lift when it's all complete. 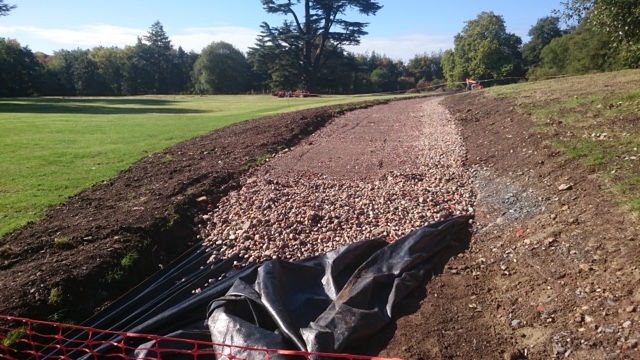 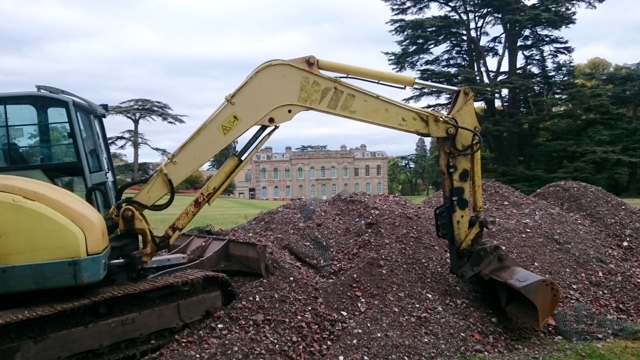 Cedars: [Once again the patchy carpet of wild 'ish' flowers amongst the wood chip have turned into a carpet of weeds, not a good look. Must sort soon...] that was my note from August,  I have now sorted them!
Lodge area: Or should I say 'welcome centre'... The work is flying along, and since I last wrote we've acquired a building site, with lots of heavy plant and rather deep earth-works. But for a few teething problems, the team are off to a flying start, and it's good to see the foundations and lower blockwork in place. 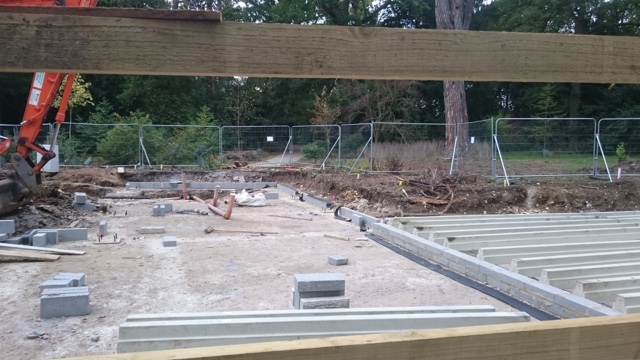 Fencing: The North and East Park fencing was all installed, and painted, and we just await a short-run of lamb wires to finalise. Additional fencing to the front boundary is also complete, and looking (at long last) much better. More remains to be done, after further ground and tree works are complete.
Pond Dipping: Adjustments to the plan have been made following tree work that opened up some impressive views of the lake. It became evident that there was also a more suitable location for the platform once we could see how the water levels were set against the bank. We now have a really good set up in the offing, and work should begin around the end of the month, maybe into November. 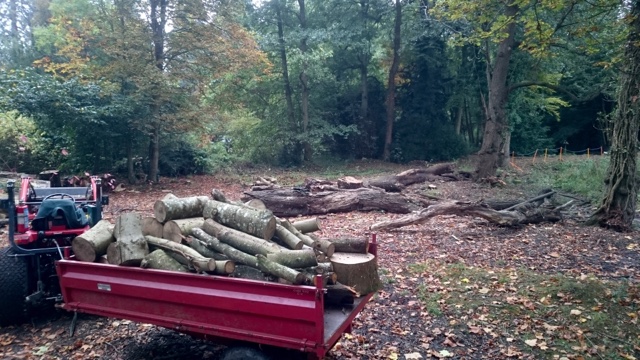 Bird Hide: Following on from the dipping platform was an alternative location for the planned bird hide. We've now a much better site for the hide, giving more shelter and opportunity to see birds and a stunning view across the middle pool. 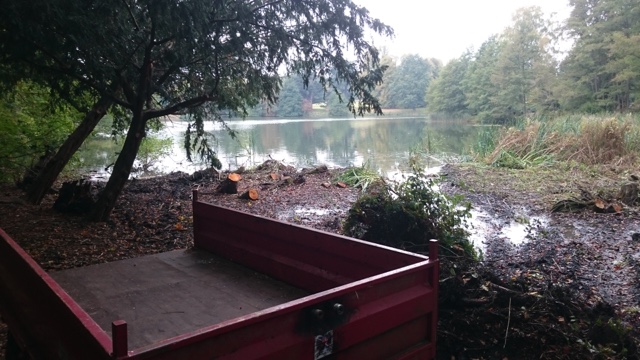 Other HLF Tasks: These are coming thick and fast now, but then we're seeing a peak of activity with three, sometimes four sets of contractors on site. Footpath works have necessitated many trial pits/garden archaeology, in many places. And tree clearance is currently forcing much timber moving - lots of heaving and huffing! All is progressing well however, and moving forward positively.
Another fascinating diversion is my involvement in planning interpretation for 2016 which is to be placed in the new welcome centre, gallery entrance and in the landscape. It has produced yet another opportunity to revisit the historic maps, as I look to explain the long-gone Baroque garden. 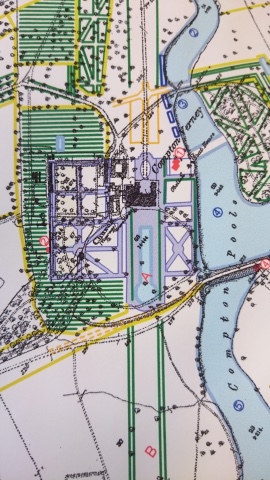 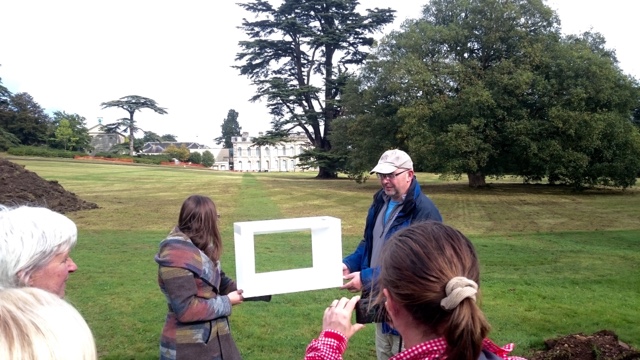 And there's more! Of course, any large project such as this wouldn't be complete without an increase in both visitor engagement and 'outreach', and so I'm also heavily involved in planning new activities as we move towards and through 2016 - did I mention it's Capability Brown's Festival Year? (That's why we're Re-viewing the Landscape!!)
Planning Work: Well, as the 2015 meadow project settles into the memory bank, next year's exhibition builds. I am of course referring to an allotment feature, so whilst the site undergoes its biggest transformation since the mansion restoration; I'm engrossed in planning a 1950s allotment. Makes a change I suppose!
Time to sign off, for now. If you want to see the latest images from the grounds at Compton Verney, just Google #CVGrounds 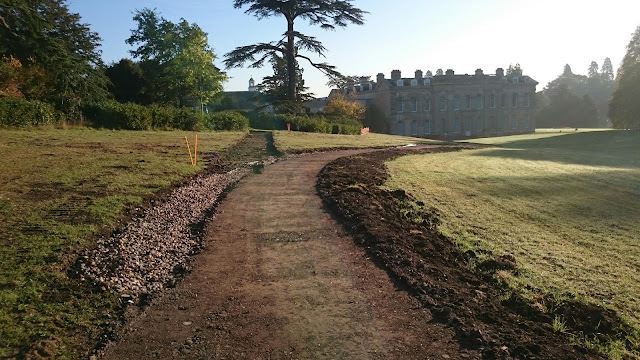 Posted by Gardener Gary at Thursday, October 15, 2015 No comments:

A Slice of Heritage Open Days

A quick post with news that Compton Verney will be opening today in support of Heritage Open Days!

- A grade 1 listed mansion, redesigned in the 1760s by renowned architect Robert Adam, with interiors adapted for use as a gallery and museum (personally I love the folk art collection!)

- Landscape garden, again designed by Brown, with smooth lawns and accessible footpaths through wooded garden areas, and views across a classic English Landscape.

- In addition to all this, the current exhibitions will also be open to Heritage Open Days visitors, including the popular 'Arts and Crafts House: Then and Now', featuring a large wild flower meadow, inspired by William Morris, and designed by Chelsea Gold medal garde designer Dan Pearson. 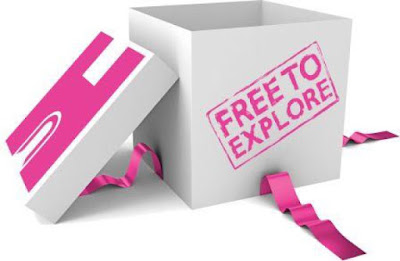 So, even if you have just two hours to spare, why not join us today at Compton Verney for a slice of Heritage Open Days - you might like it!

Posted by Gardener Gary at Thursday, September 10, 2015 No comments:

Chapel Bank: Passed by on my way to the tools... The
Agapanthus  planted two seasons ago into pretty average soil is flowering beautifully now; three large heads looking wonderful in the morning sunshine. After all the worry of the rabbits, the Stachys and Bergenia are settled and spreading, great textured weed suppressors indeed. Loving the Verbena too.

H&S: Soaped down all the steps and shady paths this morning, old and new alike. As beautiful as the mansion be, it has many parts in almost constant shade and algae is a regular terror. Nobody really notices the effort, but if I stop, someone is sure to slip! Who puts smooth textured stone steps in heavy shade anyway? Have we not learned anything!

Cedars: Once again the patchy carpet of wild 'ish' flowers have turned into a carpet of weeds, not a good look. Must sort soon...

Lodge area: The area to become the building site is one of the strongest growth areas for shrubs planted but three years back. Had a first foray into moving some of the plants, but deduced quite quickly that it simply isn't cost or time effective. Ultimately I need a clean sheet for this area, so for the plants; a stay of execution....

North Park: But for a lick of paint, the new railings are installed - although to everyone's concern the cattle are threatening to add their touch to the scene, leaning on the rail, popping their clumsy heads through and lifting it up. One cow is tolerable, but when three attempt to restyle the fence? Not good. Thankfully Nick, our local farmer was quick to our call with a line of leccy fencing, so we'll see what the cows make of that in the morning...

Pond Dipping: Enjoyed a brief visit to the site of our soon-to-be pond dipping area. A biologist offered some advice to an assembled group on how best to manipulate the conditions to suit our needs. Fascinating and I'm looking forward to having my first official dip next summer!

Watercress bed: reviewed progress down at the water cress bed, which has come a long way thanks to Anne's efforts. We're forming a plan for winter renovation, and propagation of new material next spring too, then, hopefully, we'll be cropping again next year.

Maybe I'll get the scythe out tomorrow, heaven knows it's long overdue...
Posted by Gardener Gary at Thursday, August 20, 2015 No comments: