Rousham has been on my garden visiting agenda for some while but recently, having focused on the garden for a study assignment, it suddenly rose up the rankings. I finally managed the visit on a warm September Saturday, but whilst the early arrival made for a peaceful garden walk, the glaring September sunshine made photography something of a challenge - please forgive the heavily edited pictures. 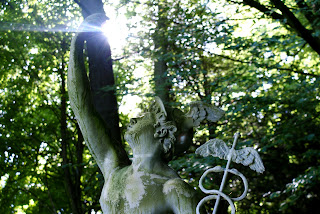 Rousham Park House and Garden more than lived up to expectation. I had a fascinating and engaging visit, and for much of the time there was but a handful of other guests around. The arrival was something of an oddity, as no visitor centre, shop or café existed; just a ticket machine to cover garden entry. The efficiency of the robot like visitor welcome didn’t quite make up for the lack of a human contact, but it was quick, and the more I thought on this simplified welcome, the more I warmed to it. 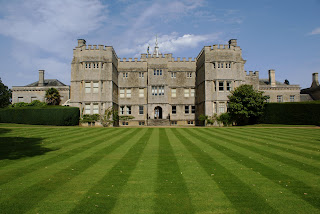 The short walk to the garden allowed time to read the entire garden leaflet, and as I rounded the mansion, the ‘un-commercial and unspoilt’ description in the leaflet was immediately challenged with the ongoing removal of an event marquee from the bowling green - that sparked a wry smile I must admit! On balance, I have to say that I’m used to seeing marquees and such like at historic properties, as there is a need to harness every way possible to keep the funds rolling in – country estates aren’t as profitable as they once were! 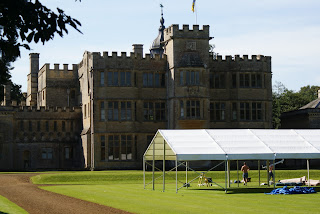 By way of an introduction to the garden, I feel that to understand this garden it is more important than usual to understand a little of its heritage. I’ve chosen therefore to hack some of my study work down to bite-sized chunks in a way that might help, rather than write a straight review of my experience. I hope the post makes sense and shows the garden in the positive light that it deserves.

Sir Robert Dormer first bought Rousham Manor in 1635, early investment included a new manor house, and by the mid 1670s formal gardens existed. Following early work by Charles Bridgeman, William Kent was employed, who from the late 1730s instigated landscaping and building works to the gardens, estate and mansion. In moving Rousham forward, Kent seems to have initiated a whole new style in garden design, and his use of planting, developed in connection with the gardening staff at the time, and his use of built structures and ornamentation; was exemplary. 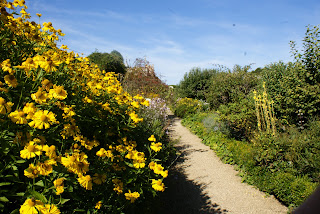 Statuary and structures within the garden are of a classical, Augustan nature and those without to ‘Gothick’ design. On a distant hillside, a sham ruin still sits proud, and is credited in Jeffrey W. Whitelaw’s ‘Follies’ book as being one of the earliest known. The garden is largely Italianate, most likely conforming to General Dormer’s ideals, drawing no doubt on Kent’s experiences in Italy. 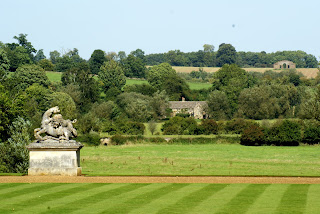 The gardens strength appears to come from Kent’s expert use of objects to draw the pedestrian through, and of his intelligent use of light and shade in the planting to create mood. I have to admit though, that a ‘proper’ route through the garden wasn't obvious, and the map provided, though quite descriptive; wasn’t helpful from a directional point of view. Back in the day, this atmospheric garden gained much interest from notable people, as indeed it does today. Jane Fearnley-Whittingstall quotes Horace Walpole in her book ‘The Garden, An English Love Affair’ - "the garden is Daphne in little, the sweetest little groves, streams, glades, porticos, cascades and river imaginable, all the scenes are perfectly classic". 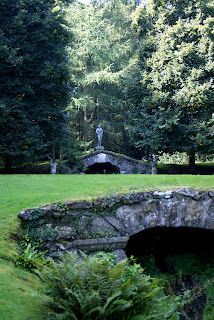 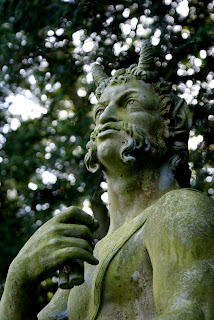 It is certain that Kent adjusted and utilised antique features in the landscape, the thirteenth century Heyford Bridge over the River Cherwell in particular. He also created viewing points from within the gardens which allowed subtle but maximum enjoyment of the eye-catchers. This maybe wasn’t the first attempt to harness distant views from within a garden, but it was achieved in an informal way, and the garden as a whole flows ‘naturally’ as a result. Much land-sculpting would have happened to achieve this apparently natural garden, and Kent’s introduction of classical structures, features and ornamentation was inspired. At Rousham, as elsewhere there became a reliance on these built classical elements, and sculpture. The items were loaded with meaning, sometimes of a classical or mythological nature, but also of a personal nature. The Dying Gladiator and Lion Attacking a Horse statues at Rousham, as Tim Richardson suggests in his ‘Arcadian Friends’ book make reference to General Dormer’s military career. 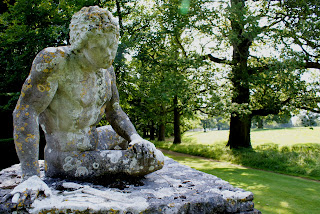 All the elements combine in the garden and a wonderful atmosphere pervades throughout. In some locations designed and carefully managed views are obvious, yet others just appear out of nowhere. Hefty built structures and striking statues blend perfectly in a ‘naturalistic’ setting, and a number of carefully formed areas are just exquisite. A small but significant signal to the originality of Rousham is the use of the ha-ha, the introduction of which is credited to Bridgeman, according to Horace Walpole. Kent lifted Rousham a new level, and with his softening of Bridgeman’s straighter layout, made areas such as Venus’s Vale so intimate and special. He displayed a mastery of plants to control light and shade, a comprehension of the reflective qualities of water, and used various techniques to draw one through a garden of discovery. 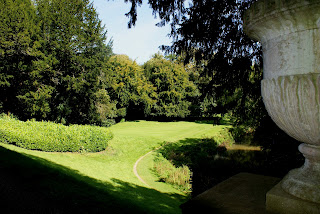 When looking back, I've learned that Rousham is more than a garden, it was a gateway to a new era in gardening. Garden walls came down, ha-ha's were sunk along the boundaries, and a new aesthetic spread through the land. Today, the garden is I believe as complete as it was back then, and as such has become a rare survivor; an example of a landscape garden from the first half of the 18th Century. It was, and is a treat to walk around, the wide gravel walks narrowing to quirky single step tracks. A blanket and a picnic on the lawn, in a leafy glade, is just as refreshing as a break on an elaborately carved seat in the Praeneste, and the Cherwell flowing past allows clear views across fields and hedgerows. 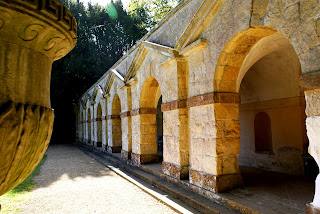 I thoroughly enjoyed my visit, and there is a beautiful walled garden I haven't even space to mention here, and I'd definitely recommend a visit. My only tip is to print off some literature to take with you, anything which could help explain more of the visual feast that you'll experience. If you haven't yet guessed, Rousham just nipped onto the top of my favourite gardens list! Do visit and enjoy - but please check the website as age restrictions apply.

A clip on YouTube - Monty Don at Rousham
Posted by Gardener Gary at Monday, September 24, 2012

Age restrictions! If you are too young you might be noisy or too old and you might fall over?

It's the first time I've seen a lawn to admire but, however beautiful Rousham might be, I can't imagine feeling at home there - more lost in the landscape than admiring of it.

I know what you mean, but I'd guess there could be a safety element too. The River Cherwell flows at the base of the garden,and there are numerous ponds and ha-ha etc.
I guess gardens just work for some people, everyone having different ideals and so on. I could go back again and again!