Note: Addition to this 2011 post, prompted by the interesting tweets from the #stowetweetup group this weekend. I visited Stowe in September 2011 and was inspired to write a little about Lancelot 'Capability' Browns connection there. I've since picked up a little more that is worth adding to the post to complete the story so to speak. 90% of the post reads as before - I've tacked the addition right on the end - see below!


It may surprise those who know me, but on a recent trip to Stowe one of the boxes to be ticked was a visit to a little church which is tucked away and hidden from the main visitor route behind trees. The visit was perfectly timed to make the best of our extended summer, (now a fading memory,) and we blended with the steady stream of people who also wished to make the best of this curious and beautiful landscape garden.
With so much to see at Stowe, high temp’s, an excitable toddler and gravel paths lined with visitors, I thought the usual emotional connection to be had with Stowe would be dampened somewhat. It struck me very soon however that the scale and design of the garden was such that visitors were being swallowed in good numbers, losing themselves off through the shrubberies. In fact, the experience was every bit as enjoyable for seeing the garden alive with people relishing the October sunshine and children playing; although, maybe not the lad kicking a football against the Temple of Concorde! (Although the building has withstood much worse I’m sure!)

﻿﻿﻿
Since my last visit to the National Trust property, I’ve read a good deal of text about Capability Brown, spurred on again by the successful summer-long exhibition in 2011at Compton Verney. Naturally I feel more attached to Brown at this moment than ever before, and have discovered that, in a similar way to the network of National Trust properties that are liberally sprinkled across the nation, there’s also a network of Brownian designed gardens and landscapes peppered across the country too; many waiting to be discovered and re-discovered by us all! Almost every county has been touched in some way by Brown’s hand, be it planting, lake cutting, lawn contouring or construction of temple’s and bridges through to complete mansion houses. Honestly, it is almost worth creating the National ‘Capability Brown’ Trust to coordinate and promote such an impressive collection! Any takers?!


﻿
﻿
Back to the Stowe visit - On this occasion I was hoping to seek out for a second time the Church of St Mary, which is tucked away, intentionally by Lord Cobham, behind trees near to the main Stowe House. Whilst all the gardens developed during the 18th Century, including the addition of numerous garden buildings, the church, although retained, wasn't significantly developed and didn't figure in the overall scheme. Although not part of the National Trust, it is very welcoming and drew me for its connection with Brown, in particular for his marriage to Bridget Wayet on 22nd November 1744. It’s a pretty building, very homely in a church'y sort of a way, with the oldest parts dating from the 13th Century. It has been altered throughout the centuries, and more information can be found about the buildings history through the link at the bottom of the post.
Brown had been employed as Head Gardener to Lord Cobham at Stowe from the early 1740’s and moved his new bride into the western ‘Boycott’ Pavilion after their marriage. Whilst he didn’t spare the horses with development of the gardens, he also didn’t waste any time starting a family with the arrival of another Bridget and Lancelot, christened in 1746 and 1748 respectively. William, in 1750, sadly didn’t live longer than a month, but John survived, and was the last to be christened at St. Mary’s in 1751. So it was at Stowe, that his married life and all important family began, and for me, this is reason enough to make the visit, to understand, and feel just a little more - after all, behind every good man....
In the cemetery, at St Mary's, sitting on the bench and secluded from the main gardens, I sat looking at the church. The head-stones leaned amongst the grass, and the metal doors clinked as the odd visitor (not that sort of odd!) entered the church. It sparked a memory of a visit to St. Wilfred’s, in Kirkharle, Northumberland, just a couple of years ago. St Wilfred's also figures in the story because Lancelot himself was christened there on 13th August 1716. (I guess this only leaves me with a visit to Fenstanton for the full set!) Seriously, without wanting to sound like a groupie, when the occasion presents itself, I now more than ever enjoy visiting the places where he trod, and in particular the places that were influential in his life. I’ve visited but a handful of his landscapes, which can be inspirational, and I’m inspired to visit many more over the next few years, many of which are featured in books like The Omnipotent Magician, by Jane Brown, or Capability Brown, by Roger Turner. 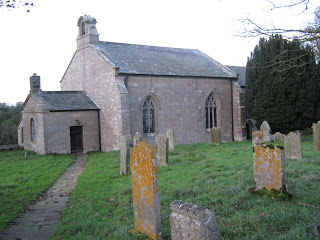 I guess for me, the visit provided a moment where I could drift back in time, and connect with a place, a man and his family who would have known this garden intimately. Little Bridget and Lancelot junior would have toddled along those very pathways like my toddler, and the man himself would have paused on the bridges as I did, to grab a view of the scene, and hold his boy tight at the waters edge.
I hope this post goes some way to promoting the man, the designer, landscaper and the architect who touched so much of the ‘English’ landscape, and so many people’s lives.

Well, I did mention a visit to Brown's resting place would complete the set, and funnily enough late last year I found myself driving right by Fenstanton on the way to a training course in Ely, Cambridgeshire, about veteran trees of all things. I couldn't resist the temptation to pop in, and luckily I had my camera with me... As an official disciple, I'm glad to have visited Lancelot's place of baptism, the chapel where he was married, and lastly his burial location. I now need to visit around 150 of his commisioned landscapes....
The exact location of his burial spot within the graveyard at St. Peter and St. Pauls, Fenstanton isn't known but a simple memorial stone, isolated in a carpet of grass seemed very appropriate. Indoors a larger family memorial has been errected on the left looking towards the chancel, and I was kindly pointed in its direction by a helpful chap preparing for the day.

﻿
It's quite a nice feeling having read so much about the man, to see some of the the places that figured so prominantly throughout his life. He achieved a great amount throughout his career, and I understand the fact that he wasn't accepted by his contemporaries, but in appreciation of his inspiration and achievements, I'm happy to have dedicated a tiny portion of my life to understanding a little more. In fact I currently garden my little piece of Brownian landscape with a hope that he approves of our actions! Yes I have many landscapes to see yet, and I don't expect I'll get through too many, but I shall try to experience more of the places which forced his creativity, and ultimately challenged his capability.

﻿ One of my favourite quotes, from the poet Richard Owen Cambridge (1717 - 1802) was directed straight to Brown, in the later years of his life: “I earnestly hope I die before you. I should like to see heaven before you had improved it.”

I'd like to add that if I ever get there, I know it will have been worth the wait!