I thought a quick update was in order to cover one of our more interesting days, one entailing a lake netting activity. The exercise was led by Andrew Ellis, a locally based consultant who toiled away with his assistants on a misty October day, whilst gallery visitors passed by on their way to see the recently launched Tapestry exhibition. 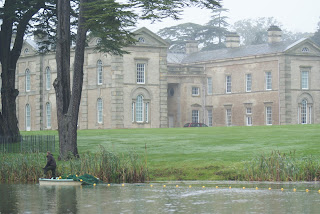 The aim, in layman’s terms was to remove a small quantity of Bream, there being an excess in the lake. The space and food available for the other species will hopefully allow larger and healthier specimens to proliferate. The cropping will of course go hand in hand with other activities such as the adding of calcium carbonate to raise the pH, which should reduce the acidity of the water. The cropping should, as Andrew states not have a negative affect on angling, in fact over the coming seasons we should see an improvement in fishing. 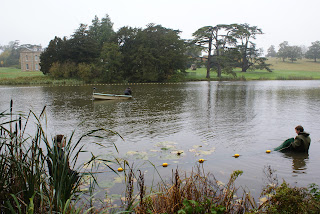 My explanation of the thinking behind the maintenance work is of course simplified, but the process is quite straight forward. I have no doubt that the actions being taken are entirely appropriate, and are the start of more regular intervention in lake maintenance. Andrew works from the nearby Lemington Lakes, yet his consultancy and lake management work has triggered travel to many countries. Fortunately for the Compton Pool, his nearby base allows easy and hopefully more regular visits to take place. 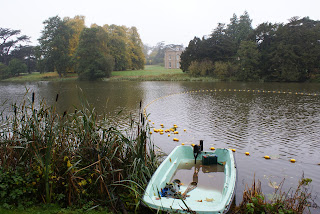 The days events can be summarized quite easily, as the next couple of paragraphs will show. Suffice to say that the work hit a few snags, and very few fish were actually removed from the lake at all. The day started at 8am with the nets being launched around the central section of the upper Compton pool, and in just a few short minutes a large loop was created, hopefully corralling a number of fish that could be sorted through. 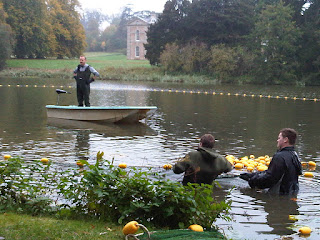 The next task was a seemingly easy one of dragging in the net to bring the fish to one point at the lakeside. During a netting survey in 2011 a few scattered remains of a fallen Cedar tree were found, and the intention on this occasion was to remove any smaller fragments during the netting. In fact, the branches were found to be many and widespread, along with two sections of scaffolding, all dragged up by the netting. The opportunity was therefore presented and the guys started to remove the debris. Five hours later, a great deal of heaving, and a few tugs from the Massey and the total sum of Bream amounted to a lowly 20lb or so – not much for a day’s hard work. Additionally, the work to repair the tears to the nets was going to require another 2 hours or so. 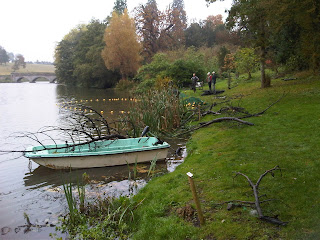 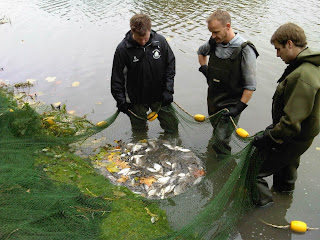 The day wasn’t a total right-off, as we now have a good trailer load of timber removed from the fishing side of the lake - this will greatly speed up any future netting operations. Additionally, the Bream, whilst still needing a good health check, looked at first glance to be generally healthy, and their sale will help towards the base cost of any calcium carbonate we purchase to treat the water. Ah well, you win some and lose some, but I think the day balanced out in the end. We’re now looking forward to spring work at the lake, when hopefully; the sun will choose to shine down on us.

Credit: to one of my readers who pointed out that in my haste to produce the netting write up, I had described the pH incorrectly. The post now reads acurately :)
Posted by Gardener Gary at Wednesday, October 24, 2012

Hard work... but also looks like quite an adventure for these grown-up boys. Nice of them to provide entertainment for the "passer bys".

Thanks for the message. You may have guessed correctly - it was grown-up boys out to play! There was quite a lot of interest actually, lake activity always draws a small crowd!