March is generally a busy time of year for gardeners, and especially so for those who grow their own food. There is one garden show however that could be worth finding the time for - the edible garden show. Today, Sunday, was the only day that I had available, so we made the visit a family occasion and took along our toddler for some vegetable spotting. The day started with sleet; cold, miserable and steady sleet, but I was determined to give this show a try. Not only did I want to see for myself how this particular show was put together, but also, in a very small way I wanted to show my support for this 'grow-your-own' style gardening event.

Generally speaking, I have turned my attention away from the typical shoulder to shoulder packed garden shows due to the rising costs of the average visit. However, I know this show has carved a niche of its very own, and living just thirty minutes away from the unique Stonleigh Park, curiosity just pulled me in! It wasn't without a mild degree of nervous anticipation though when I handed over the entrance fee, which equated to fifteen pounds per adult. Needless to say, I shouldn't have been concerned over value for money, as the show offered all I'd imagined, and more!


In a down-to-earth kind of way, pardon the pun, I found the show to be a real breath of fresh air, apart from the hazy area near the food marquee that is - which was forgiven in a mouth watering second. The food hall it is worth saying, was very tempting. Elsewhere, stands numbered in excess of a hundred and fifty from local and national companies, to charitable organisation looking to gain members and support. Most of the show was also under cover, which made all the difference due to the challenging weather.

It was particulary good to see the British Bee Keepers Association stand in such a prominant location, which proved particularly useful for information. Bee keepers were on hand to chat, dressed in their whites, and I'm grateful to my good lady for taking the image below - as I was so busy showing my toddler the daisy and honey bee that I forgot to take pictures! 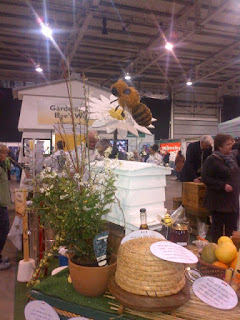 Across the show I found a decent range of useful goods on offer, even some with show discounts to tempt those with a looser grip on their wallet. It is also worth saying that whilst parking was a little here and there, once inside the door the venue worked really well. In addition to the typical spread of machinery, food, plant and garden suppliers, the venue also made space for a smallholder marquee, and three seperate live theatre areas; a feature growing in popularity these days. Sessions each day were from respected gardening personalities such as Bob Flowerdew, Alys Fowler and James Wong amongst others, and subjects ranged from 'All About Pigs' and 'Goat Management', through to 'Love Your Garden' and 'Hot Composting' - quite a range I'm sure you'd agree.

This was my first visit to the edible garden show, time just not being available in previous years, and I'd certainly hope to visit again. I was surprised to learn that as of 2014 though, the show moves to London's Alexandra Palace. This is a great loss to Warwickshire, but I'm sure that the popularity of the show will easily bring in enough trade to make a move to London viable. I know that of the many who won't choose to travel to the capital, there will be many more new visitors who do.

I just hope that the change to a different location doesn't change the feel of the event; I wish the team well. Personally as a gardener and collectively as a family unit, we found the edible garden show really interesting and full of character. Snorting pigs; clucking hens in their twee houses; giant bees; themed 'easy' access demonstration theatres;  racks and racks of seed packets, and unusual garden furniture - the show appeared to have the lot - the only thing it lacked was those irritating plant filled trollies that people usually buy to trip unwary visitors! Seriously, I would thoroughly recommend a visit to the show, both to those who already grow their own, and for first timers who need inspiration and ideas - the show offers both in abundance!
Posted by Gardener Gary at Sunday, March 17, 2013