The first in a new style of 'Gardening Ways' blog updates, in the form of diary entries. This first post attempts to set the garden scene in my rented home garden, which with the best of intentions remains temporary, with minimal investment in permanent planting. Pots are the order of the day, with thin border planting hugging the boundary walls and fences as though afraid of the open space.

It is compact, but it's our space and we love it :)


Seven of the twelve
Sunflowers in flower now, their various heads all uniquely different. Despite a lack of cutting, what qualifies as a 'lawn' isn't untidy still - this is due to fact that the wild plants within are dominant. The wildflower colour has subsided though.

The white lavender along the lighter fence line holds on but its brilliance is lost, bees showing little interest now.

This seasons newly acquired Musa has slowed its growth a little, and despite regular watering to keep the midribs strong, it has snapped back one of the otherwise taught leaves. The nearby pumpkins are not liking their position, with little growth or sign of fruit beyond its early summer flourish. Specimen fuchsia 'Display' pours over its container edges, and another, Lady Boothby, is two feet high after just half a season.

Canna indica, another new plant is covered with flowers and buds, and has settled well into its plastic potted quarters. A hard cut back of the Aloe vera last week has triggered healthy looking new shoots, this will be much easier to bring indoors this autumn.

A Phlomis that has sat with little progress at the base of the wall suddenly appears to be puffing up its wide heart shaped leaves - maybe the extra irrigation is proving successful. Box, re-potted earlier this year have darkened down almost completely following a good growing year. Hope to start clipping next year to get some shape, maybe.

In the border beside the house, the Strawberries are creating new plants from runners; I shall leave well alone to ensure the best chance of success. I really should invest in the soil, it has little substance following years under a hedge, and is powdery and lifeless. Fennel grows well in places, so too do the hardy Chrysanths that were thrown my way from Dad, and a few other random herbs that I chanced upon.

Cooler, damper evenings are underway, but days remain warm and productive. White butterflies are frequent visitors along with bumble bees, and wasps have become noticeable over the last three weeks. Blackfly have won the battle to drain the borage of its goodness, and have prevented a decent show of flowers on the nasturtiums yet again. 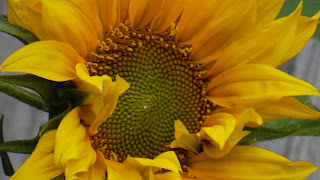