Busy times at the moment hence the lack of a decent post for a while. Indeed, even this post is a quick update to act as a record of some hefty work I've been involved in of late; Planting Trees. Apologies in advance, as for this post; as I've got my historical hat on!

The challenge has been to 'restore', & I use that word carefully, a feature of the landscape at Compton Verney dating back approximately 240 years or so. An early 19th century map shows an avenue, slightly splayed shape which is positioned about a mile from the main mansion. It seemed simply to act as a draw for the eye when viewed from the front portico of the mansion.

There seems to be no other reason for the existence of the original avenue other than to act as a fixing point in the landscape, the formal lines of trees displaying a control over that distant part of the landscape, proving ownership & artist flair etc. For information, there's no present evidence of an 'eye-catcher' at the far end of the view either. An ornamental farm building, date unknown is on the horizon, although this would have been hidden by the maturing avenue trees. 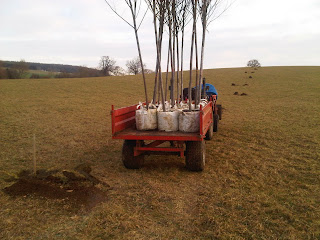 The avenue was believed to have been English Elm, a species that was hit hard by 'Dutch Elm Disease' in the late 1960's & 1970's. Millions of trees were affected by the disease, & Compton Verney's avenue & landscape wasn't spared. As with many English landscape gardens, Elm shows through in the form of 'suckers' that still grow, at least for a few years, in hedgerows, (the disease eventually catching up & killing the suckers before they mature into trees.) All signs of the avenue are now wiped from the field due to farming/ploughing, although suckers are still growing next to the stream, just below where the avenue started.

On a positive note, it is therefore great news that we are now able to plant Elm once again, in the form of a disease resistant variety known as 'Princeton'. Friday last saw a group of students & staff from Warwickshire College visit, to help with the planting process. The positions for the tree avenue had been plotted previously with the help of a surveyor, & the grounds assistant & myself moved all the necessary gear & compost up to the field in advance of the team arriving. 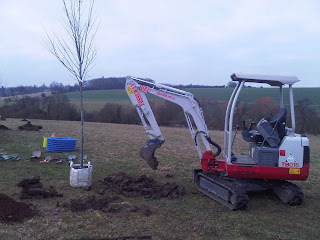 THIRTY TWO Elms were planted in a little over two hours, which was great going for our rapidly put together team. Two rows of standard trees now mark out the original avenue, & await their timber guards that are booked for installation this coming week. Naturally, we have a fair bit of in-house finishing to do, including planting a further 16 trees, but a hefty chunk of the work is now over, thanks to the Warwickshire College team.

The photo's added aren't great, but the icy breeze ensure fingers were frozen throughout, preventing any artistic endeavour. I was also very busy digging holes through the clay as the team followed behind (& at times - in front!) 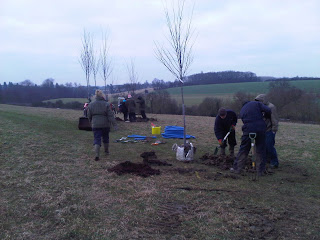 Many thanks are due to the team, & Adam the grounds assistant who have worked tirelessy on the planting so far. It is always worth a note of appreciation for the work put in by Tammy my colleague, who with the financial & moral support of Compton Verney, arranged the re-planting. This is yet another vital element of the Historical Landscape restored, long may it continue! 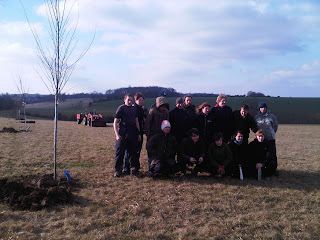