In a wooded Warwickshire valley, sitting in silence a little way back from an old carriage drive, is an oddly shaped yet picturesque building. Obviously from another age, it sits snugly amongst Yew trees with its fully restored lime mortared brickwork and newly thatched bonnet. This post is my small effort to record the work of many who toiled so that a special building from times past may breathe again. The ice house sits centrally as part of the Compton Verney House Trust estate, which now functions as a major art gallery and charitable trust.

After a long and crumbly time, and following a restoration project that lasted over two years, the Compton Verney Ice House
is now adding to its already impressive 240 years of history. Built as a practical yet pretty addition to the grounds in the 1771, the building is the key architectural feature in a part of the grounds known as the Ice House Coppice, which originally functioned, and still does, to screen the mansion for visitors entering the grounds from the south, through the main entrance and approach drive.

Whilst the ice house would have looked pretty to distant spectators in the landscape, something akin to a hermit’s cottage nestling in a green wood, its location suggests it was to appear, briefly, to guests travelling around the coppice in their carriages. For the un-initiated, I suppose the first sight of the thatched building to some Georgian visitors would have created intrigue, yet for others, who knew an ice house when they saw one, it would have hinted towards the sumptuous hospitality that could be expected on their arrival at the Robert Adam mansion. Not appearing to be an obvious stopping point for walkers through the garden, it was also intentionally hidden when viewing from the mansion - most definitely a working building. 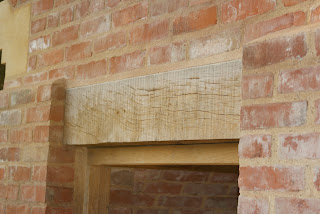 Although the design and construction of an ice house is relatively simple, their introduction to country estates in the 17th to 19th centuries offered a huge leap forward for kitchen staff. They gave opportunities of longer food storage for perishables; the preparation of cooling summer ices and drinks, they allowed creativity with iced table decorations, and were even used medicinally. They were the forerunner to the refrigerator, and simply provided a regular, cooled space, where ‘cropped’ ice could be stored. Clean ice would have been collected throughout the winter, and compacted into the insulating brick lined pit. Compton’s ice house had its impressive lake for an ample supply of ice, but ponds would often have been dug nearby, specifically for the purpose of filling up the ice pit during winter – a great job for the gardeners I expect! 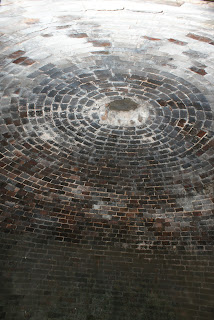 The Compton Verney ice house is one of a few architectural features added or adjusted during Lancelot ‘Capability’ Brown’s commission at Compton, from 1768. Other features were five and three arch bridges, the latter sometimes referred to as the Sphinx Bridge; a new chapel; an orangery; and possibly a temple on a hillside location - just across the lake and to the south west of the mansion. It is worth noting that the Compton Verney ice house is very similar in style to another ‘Brown’ ice house at Croome Park, which also sports a thatched covering, similar in style to ancient Chinese ice houses. The Croome structure is within a woodland setting, where trees would have shaded the structure from the summer heat, helping to maintain temperatures within. The front door to the Compton ice house opens to the east, and its longer tunnel and extra central door would have helped, I guess, to maintain cooler temperatures within the inner pit, especially during warm summer sunrises. 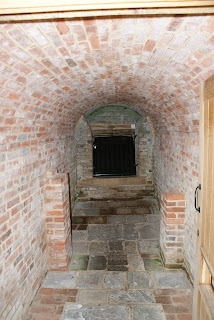 The restoration project was carried out by John Goom Architects, who employed Sibbasbridge to carry out the practical restoration. On site, the grounds team (my department!) merely facilitated works; doing whatever was needed to ensure the project kept to schedule, which was particularly challenging due to the extremely low temperatures encountered late 2010. Watching the layers of decay and overgrowth being removed from the ice house was fascinating, and despite the difficult conditions, it wasn’t long before the structure began to re-form. The ‘igloo’ styled dome that covers the pit needed brittle bricks selectively replacing; the stone ‘skirt’ that wrapped around the dome was repaired to once again support the roof joists; and the whole structure generally refreshed and repaired where necessary. The most damaged section, the barrel vaulted entrance tunnel, has been built again as the photograph shows, and also supports a thatched insulating cover and new entrance doorway.

Restoration of the ice house was made possible due to committed effort by Compton Verney and staff, and also with considerable support from Natural England. Detailed information regarding the project; the archaeology and the architects approach to the project can be found on the links at the bottom of the page.

I believe the ice house had fallen out of use in the 1800’s, and with the roof timbers removed, the dome had been hidden away. Trees had been allowed to conceal the house further, and the pit had been used as a dump for rubbish. This commonly happened due to the availability of commercially collected ice in the late 1800’s and the subsequent invention of refrigerators. On many ice houses across the country, maintenance ceased, doors were locked and pits were filled in; or they were simply abandoned. The reduced use of Compton Verney after the 2nd world war, overgrowth around the ice house, and heaping of soil over the exposed brick dome ultimately ensured its longer term survival.

Despite the neglect, bats miraculously found the neglected dome appealing. Recording and surveys were needed before any sign of work could begin, and Pipistrelle bats were found to be using the space as a social stopping off point during a nights feeding. Although not an actual roost, mitigation was needed to ensure bat access the space could continue unnafected. Throughout the project their needs were catered for, and an ecologist visited regularly, and still does, to ensure all progresses smoothly and appropriately. Timing of the practical work was chosen when bats weren't proven to use the house, and inspection of the dome before works could commence was a daily task, even though it was midwinter. Planting around the ice house has been retained so that bats can still easily find the house, large slots have been designed into both of the doors, and an internal light is on a short timer to minimize any disturbance. Whilst the restored structure will inevitably have a changed atmosphere, the changes appear not to have deterred bat use of the space, with droppings already appearing within the structure, and recording and monitoring ongoing. It is hoped that the slightly drier atmosphere will become even more appealing to bats, and there's optimism that the house will eventually become a maternity roost.
The building is now a complete and tangible part of a listed, historic estate. As a Brownian feature in a relatively well preserved landscape; the ice house represents a real time link with the past. It is a beautiful structure, and is mellowing nicely as the year and thatch fades. I’m hopeful that bats will continue to be a part of the buildings future, and that visitors will enjoy seeing it and appreciate its long service and relevance. Just think of the estate workers in the past, on frozen winters days, breaking and heaving chunks of ice up from the lake surface, and barrowing seventy plus metres to the ice house. Lets hope they had a nice warm stove awaiting their return home…

Do check the website before visiting, but do visit, its a lovely ice house in a beautiful setting - enjoy!