Visiting Canons Ashby for the first time in February 2012, we enjoyed a refreshing couple of hours in the Saturday sunshine. This was more of a familiarisation trip than a full visit, as our toddler isn't currently in the most helpful age bracket for visiting historic houses - the words 'bull' and 'China shop' come to mind! We'll hopefully be returning soon where a more comprehensive visit can be enjoyed, including a tour of the intriguing house and gardens as they shoot forth.
﻿
﻿

My focus as ever is biased towards
the garden, although my interest always spreads wider to include architecture and social history. Whilst our visit was purely a family outing, I hope the photographs illustrate the general offering the garden had in late February, and its potential for the fair weather months. It's worth mentioning that of the areas we passed through, much of the planting included herbaceous and annuals, and the garden was stripped bare in its winter form.

There were some nicely trimmed topiary specimens which added much needed structure to the garden, their long shadows being fully appreciated with the low winter sun. There were snowdrops aplenty, some cheerful winter bedding, and the enviable garden walls supported bare stems of nicely trained fruit shrubs. The said walls were richly coloured and dusted with lichen, with a variety of ironwork gates and carved stone finials dating, I'd assume, back to the early 1700's phase of building and landscaping. The stone used in the construction of the mansion was recycled from the priory that previously occupied the site.

At the time of our visit, much gardening activity was evident with works in progress to a lower terraced area of the garden and this, combined with summer bedding, herbaceous planting and fruit would I'm sure change the appearance of the garden considerably during the summer months. It was good to see investment both in time and cost with snowdrop planting, and these were blooming in quantity for a sprinkling of early season visitors. I found a very neat and well cared for garden indeed, and I'd assume around three members of staff and many more volunteers work here, especially as the parkland is quite sizeable, listed at around 160 acres (65 hectares.)
On the English Heritage register, the site is Grade II* listed, and also holds Conservation Area status; relevant map available here. The site as a whole is charming and very nicely positioned, with the Elizabethan mansion taking center stage and gardens wrapping around the house from the south, clockwise to the north west. Most parts of the garden offer views across peaceful countryside, and the numerous garden walls provide vertical growing spaces which are utilised for wall trained fruit. I've also read of a fernery, which was dormant during my visit and positioned along a north wall.
The early 1700's was the main period when the gardens were layed out, although the parkland clearly shows its Augustinian priory history. The garden design is said to have remained largely unaltered since its early 18th century creation, but for the Victorian improvements, after which they had slipped into decline during the 20th century. The National Trust halted the decline following acquisition of the estate in 1981, and maintained the garden thriftily thereafter, until a programme of restoration began in 2008, to a Victorian scheme by Sir Henry Dryden.
Within the garden at Canons, a handsome shepherd, playing his pipe is to be found upon a plinth; this immediately reminded me of similar ones at both Charlecote Park and Powis Castle. Further investigation lead me to understand that the Powis shepherd is believed to have been supplied by John van Nost or Andrew Carpenter, and the Canons shepherd is very similar if not identical to the Powis statue. It turns out that the Charlecote shepherd is is slightly different, and supplied by Edward Hurst, another London based ornament supplier. The common link is the period, when formal and expensive Baroque styled gardens were in demand, and the very best ornamentation was sourced from reputable suppliers in the Hyde Park area of London. 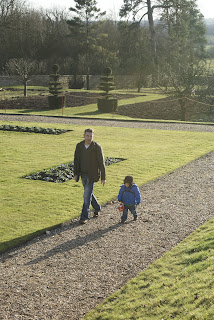 Various ground levels are exhibited within the garden, which would have functioned then and now to protect plants from foraging pests, found loose on the estate. The gardens generally descend as they move away from the house, merging seamlessly in parts with the surrounding landscape, which also slopes gradually towards one of the lakes. It was a very pleasant garden visit, with lots of space to exercise the boy, and I'd definitely return in future. I hope that in my rapid description of our visit, I've inspired you to also make the trip, and will by doing so support the work that is happening within the gardens. In addition to the house, cafe and gardens, there is also the Priory Church of St. Mary, which is stunning and well worth the short walk across the green. There is also a diminutive yet lovely little play area for little ones - which came in very handy!
Many thanks for taking the time to read about our visit to Canons Ashby, if you're a past visitor; do comment to let me and others know what you thought of the garden. Until next time - enjoy your gardening!