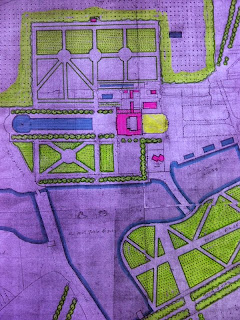 Using a photocopy of an estate plan of Compton Verney from first half of the 18th Century, by James Fish, I've roughly blocked out some of the. obvious features of this early design. Just a brief exercise to see how the garden could have looked prior to 'Capability' Brown's alterations from 1768.

The geometry and key features become much clearer, as I hope the highlighting shows. Look for the long (100m +) canal, large production garden, heavily planted areas and walks aplenty; presumably gravel, but possibly grass. The original chapel, an earlier. construction to the south east and at an angle to the newly built mansion, looks to have been screened to some degree by planting (Brown later relocated it completely.)
What I can't be sure of however is how. the dots on the plan relate to planting. on the ground. They could have been fruit trees, pleached trees, clipped evergreens or even containers - intriguing to say the least! I guess it would depend on the location of each set of points, for those to the south front would block views from the downstairs family rooms if they were anything but low shrubs, clipped specimens or such like.
To understand the make up of this early garden, believed to have been built, we. need to know what was eventually constructed and planted. Of course, there are few visual clues to the early garden available to us today; Brown's work was so comprehensive.
Under the magic wand of Brown, the lake was re-shaped, a causeway removed and two significant new bridges were added. A new chapel and ice house, possibly a temple on a south-western hill top, a vein like. network of paths, and of course plenty of lawn shaping and moulding.
The earlier formal design appears quite cluttered in some ways, but a plan that looks quite simple and naive on first view (my fluorescent highlighters may not help!) does actually show that much thought was given to views and vistas from many key locations. The design was therefore carefully. considered, quite unsurprisingly given the major investment that was made in the mansion itself at that time.
I hope we can turn up more information as time passes by, as this garden, according to the plan was a serious. piece of garden and landscape design for this south Warwickshire location, and one that deserves more understanding and recognition - and you all thought I was hooked only on. Brown's work?!
The previous Baroque style garden shown below is gone but certainly not forgotten. If you know anything of this earlier garden, indeed anything that can help us understand our location better, please do get in touch. (Voluntary geophysical surveys particularly welcomed!)