Northumberlandia, the Lady of the North

Northumberlandia, the Lady of the North, opened to the public in 2012. She was two years in the making and many more in planning, the whole project triggered by the desire for mining on adjacent land. If I have grasped the idea correctly, this was a 'restoration first' project to provide a resource for the local community and for tourists, a sort of gift in kind - and from where I stand, it seems to tick every box. 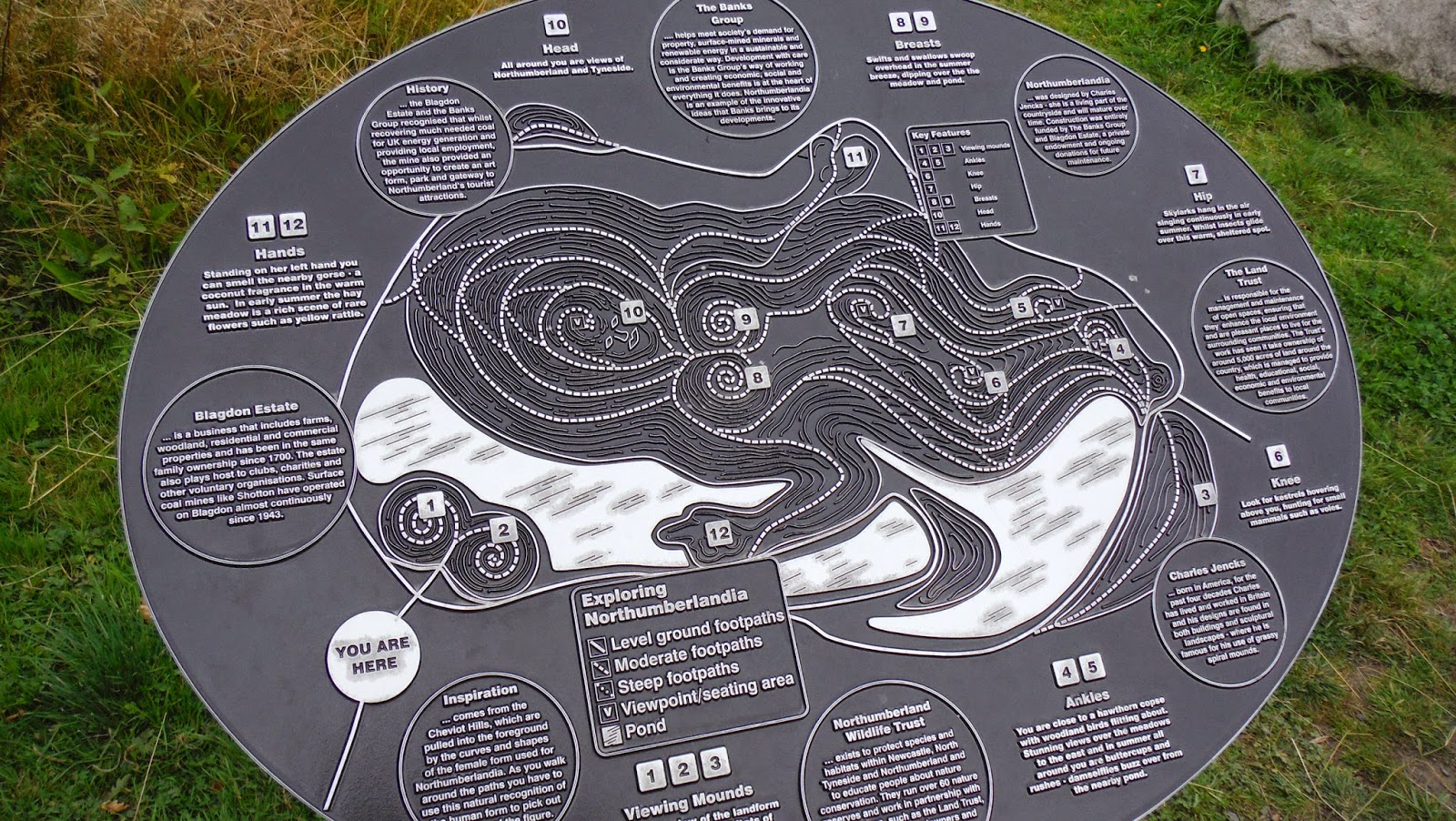 Type NE23 8AU into the sat-nav and you'll be delivered to a sizeable car park that on arrival gives no clue to the marvel that is just beyond the trees. Having donated at the gate, you're into a small oak and beech wood for a short walk, throughout which you are teased by a large green belt of hillside seen amongst the branches. Stepping out into the open, two mounds initially come into view, themselves begging to be climbed. In any historic garden just one of these would be a fine feature worthy of much attention, but they are tiny compared to Northumberlandia herself, who rises above and beyond. 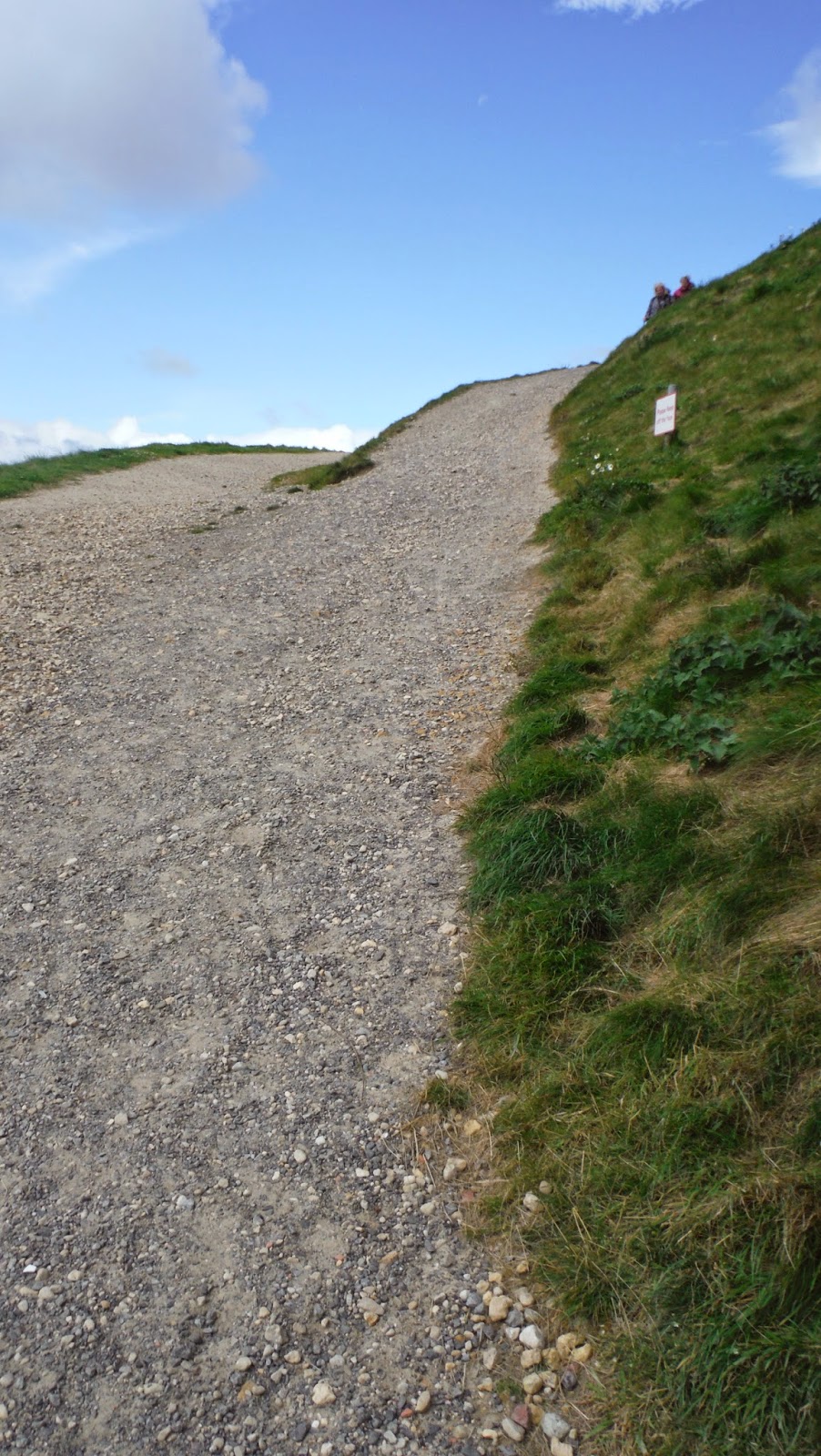 She truly is unique with her sculpted form clothed in grass, broken into sections by contrasting gravel walkways that wrap around the form like a ribbon. The scale is quite remarkable, being 100ft high and its construction defies belief - I still can't quite see how this project moved from paper to reality, and in such a short time - a great achievement indeed. 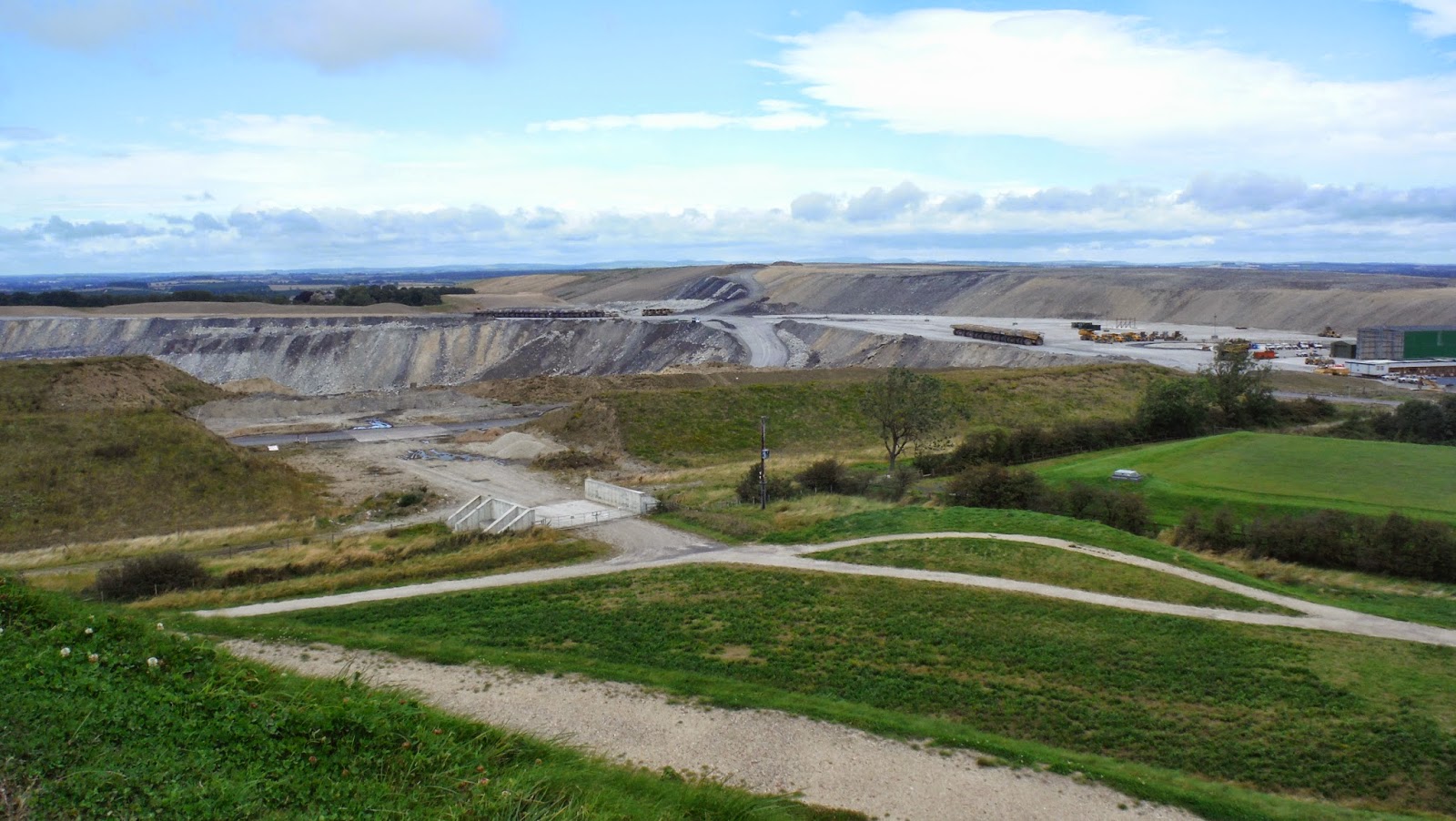 When climbing the hills the open cast mining that triggered the project comes into view, and an impressive sight it is too. Despite being just next door, the operation pales in comparison to the lady, and it's worth remembering that neither the mining or the land form may have existed without the other. 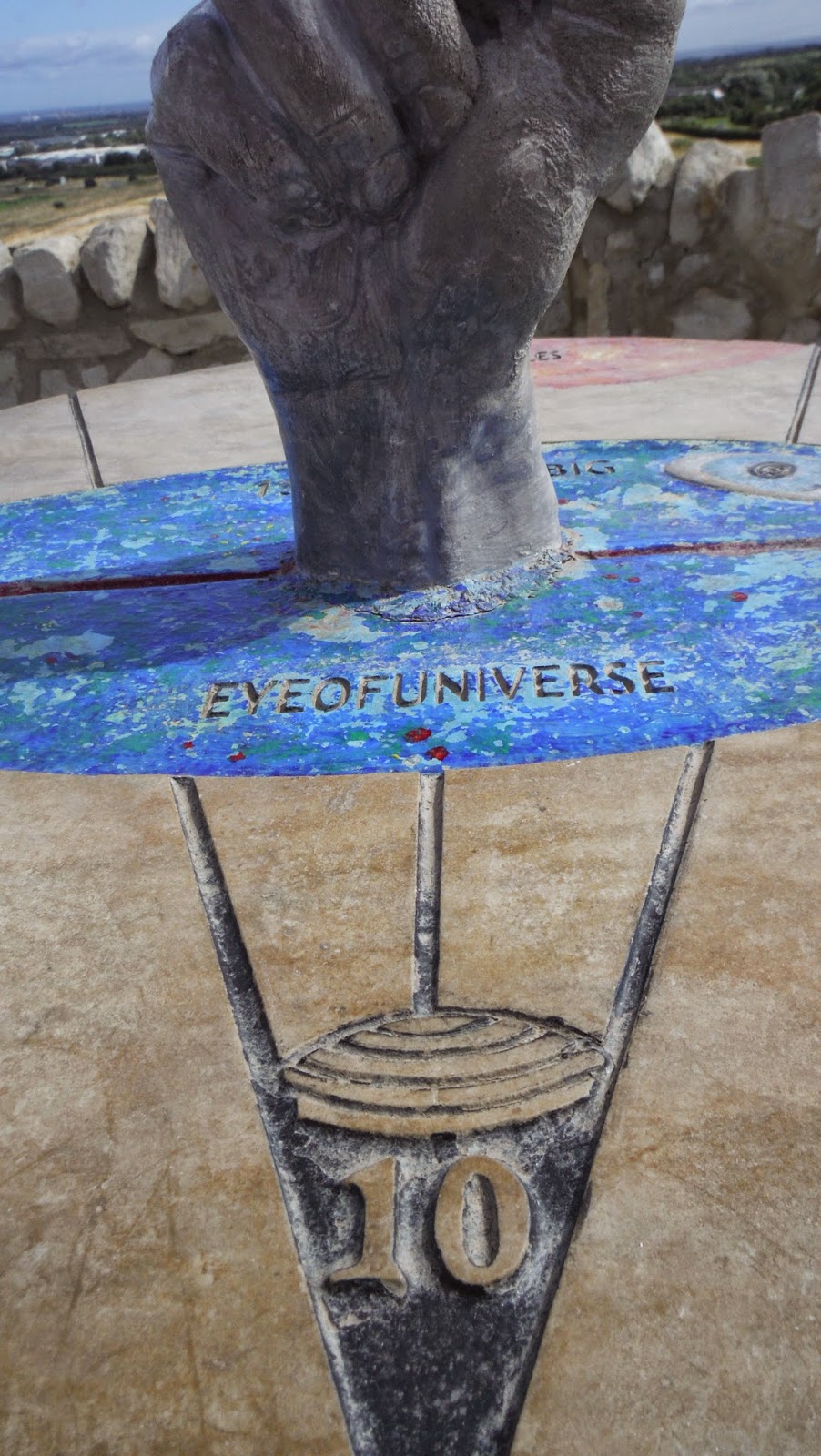 One image attempts to illustrate how steep and loose the path surface is in one or two places, being made up it appears from recycled materials - elsewhere though it is binding and holding together well. However, my focus on the paths could have been increased due to the weather, as mentioned below, but the grass, paths and water all marry perfectly to create a form that sits wonderfully in its surroundings, offering so much for appearing, on the surface - very simple. 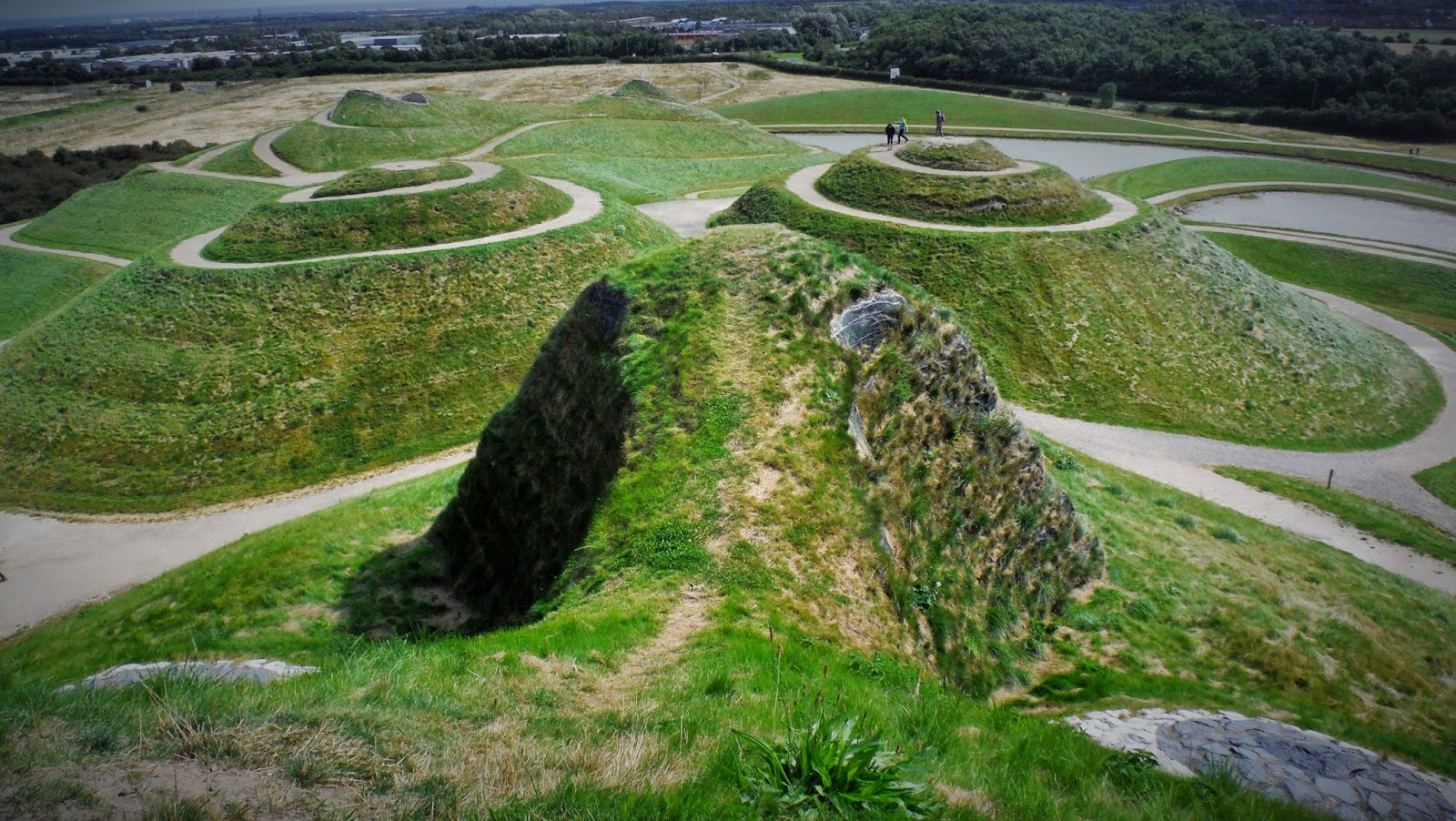 The character behind the design is architect and designer Charles Jencks, who took inspiration in part from the Cheviot hills for this stunning land form. For many, a walk in those Cheviot hills might always remain a dream, but Northumberlandia offers real accessibility - I can't think of any other location that draws you along its path network so easily. 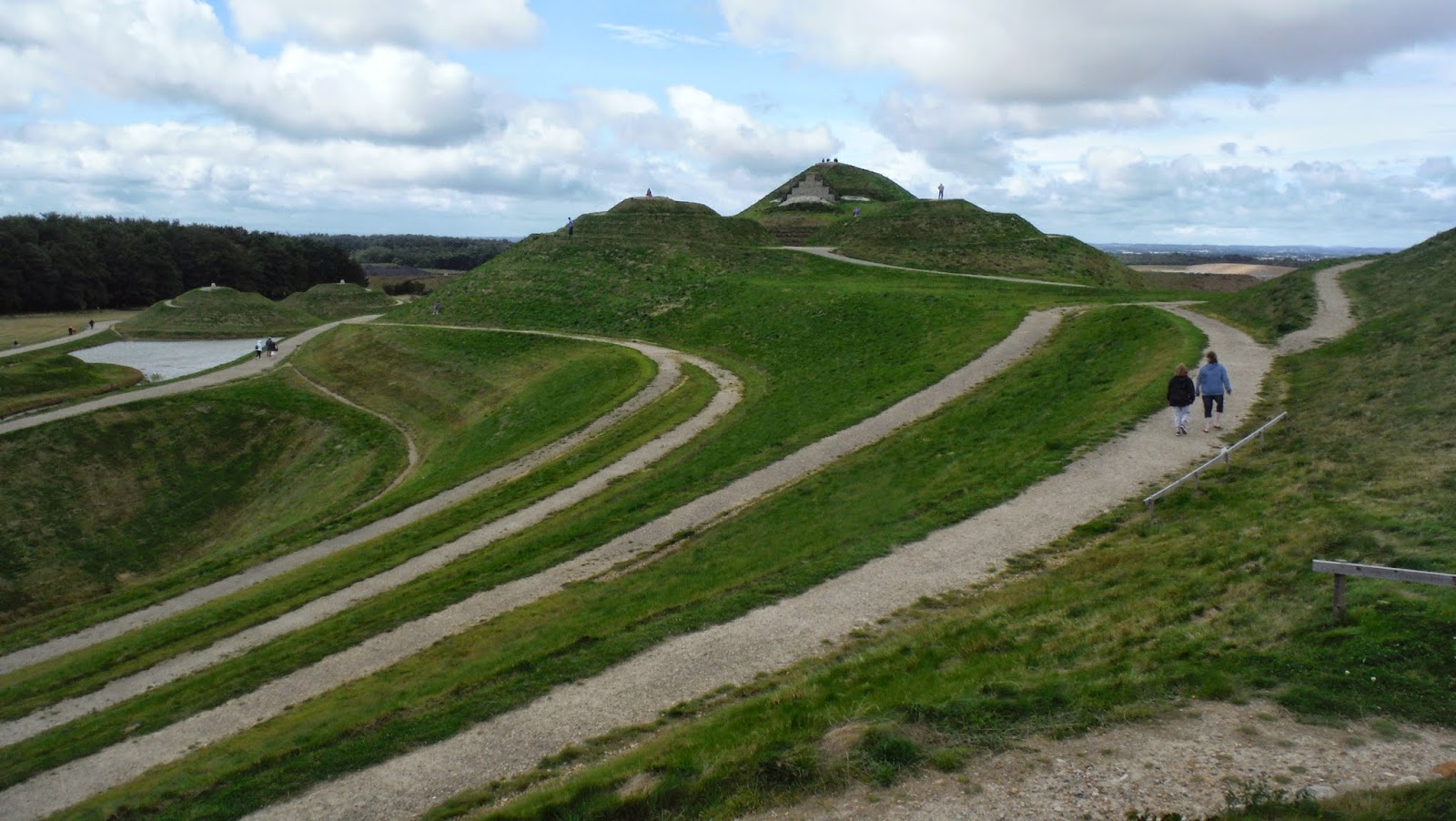 What may not be evident in the images however, is the incredible wind that was sweeping around the slopes on this August day, causing some visitors to abandon their attempt at the summit! We really had to watch our step, keeping little ones away from the edges, and pushchairs were no go on the highest parts due to safety concerns. We did make it to the top for those amazing views, and I believe it isn't always that windy so the experience on another day would have been very different.... 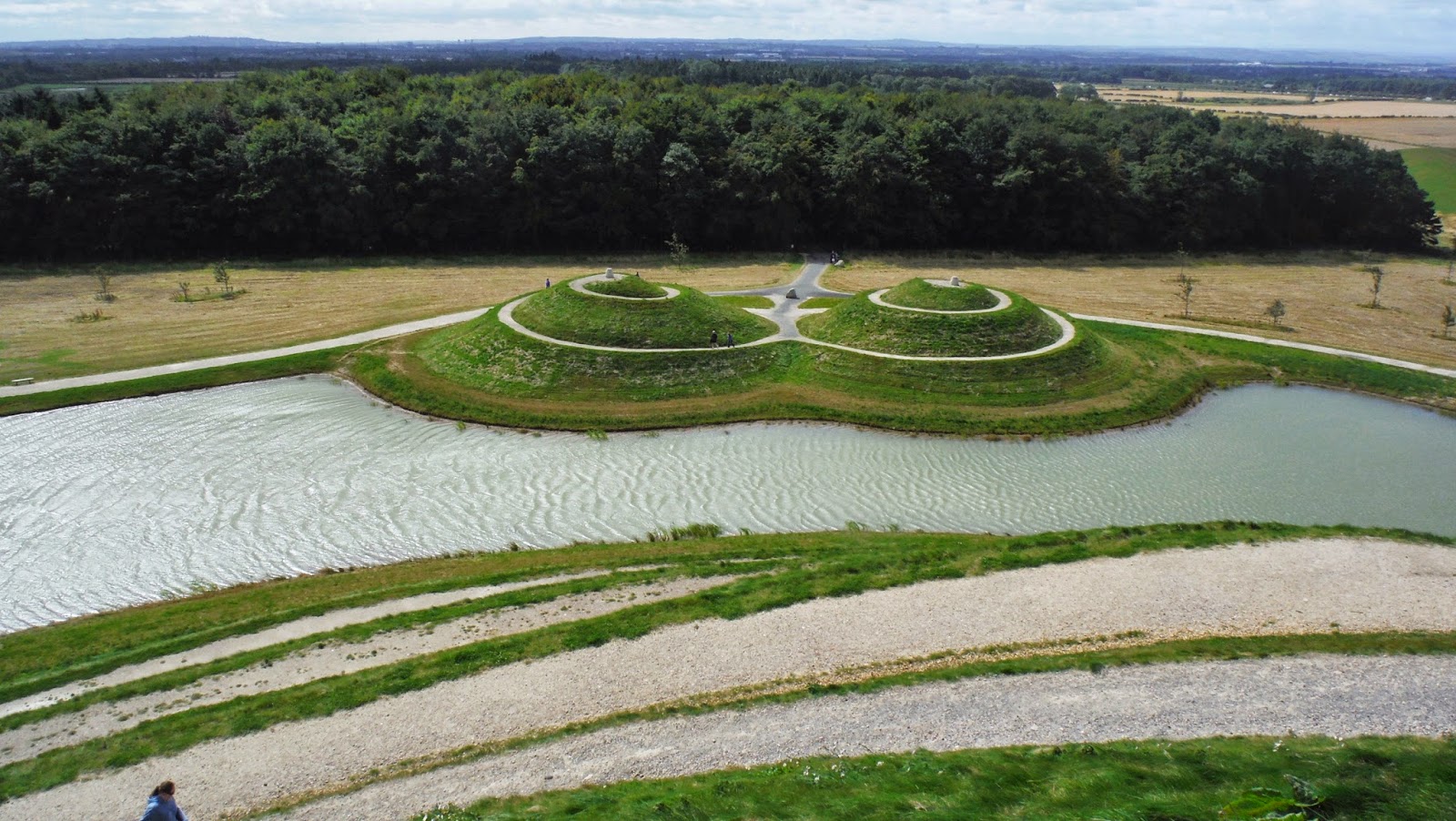 For me, the fact that these hills were born out of compromise, a kind of deal between the land owners and the local community, is the astonishing thing. This may be over-simplifying the situation, but in effect the initial negative public reaction to plans for mining triggered something really positive, which led to land being offered for use. Just a few years later, and a great deal of effort, and we've a modern art form to enjoy with lots of benefit to local flora and fauna.

Northumberlandia's website clearly shows how this project grew to involve many partners, and now has many more stakeholders and supporters. I'm particularly reassured by the continued support of, amongst others, Northumberland Wildlife Trust, and the Land Trust, although support is still needed in a number of ways. I shall watch Northumberlandia from a distance, and support when I can, as this is a worthy project that I hope can be learned from and repeated around the country.
Northumberlandia on Twitter: @Nlandia  and on Facebook

Awesome tips! I wish I would have read your ideas pre starting my blog!

This is Really nice Tips. Thanks to sharing wonderful Tips.