I chose to 'follow' a cedar tree at my works location of Compton Verney. The choice was helped by knowing that we had quite some work planned for this tree this year, which I thought would make a good story. That is almost by-the-by, as other works and projects to the estate soon overtook me, and I haven't blogged on this subject for ages - until now! 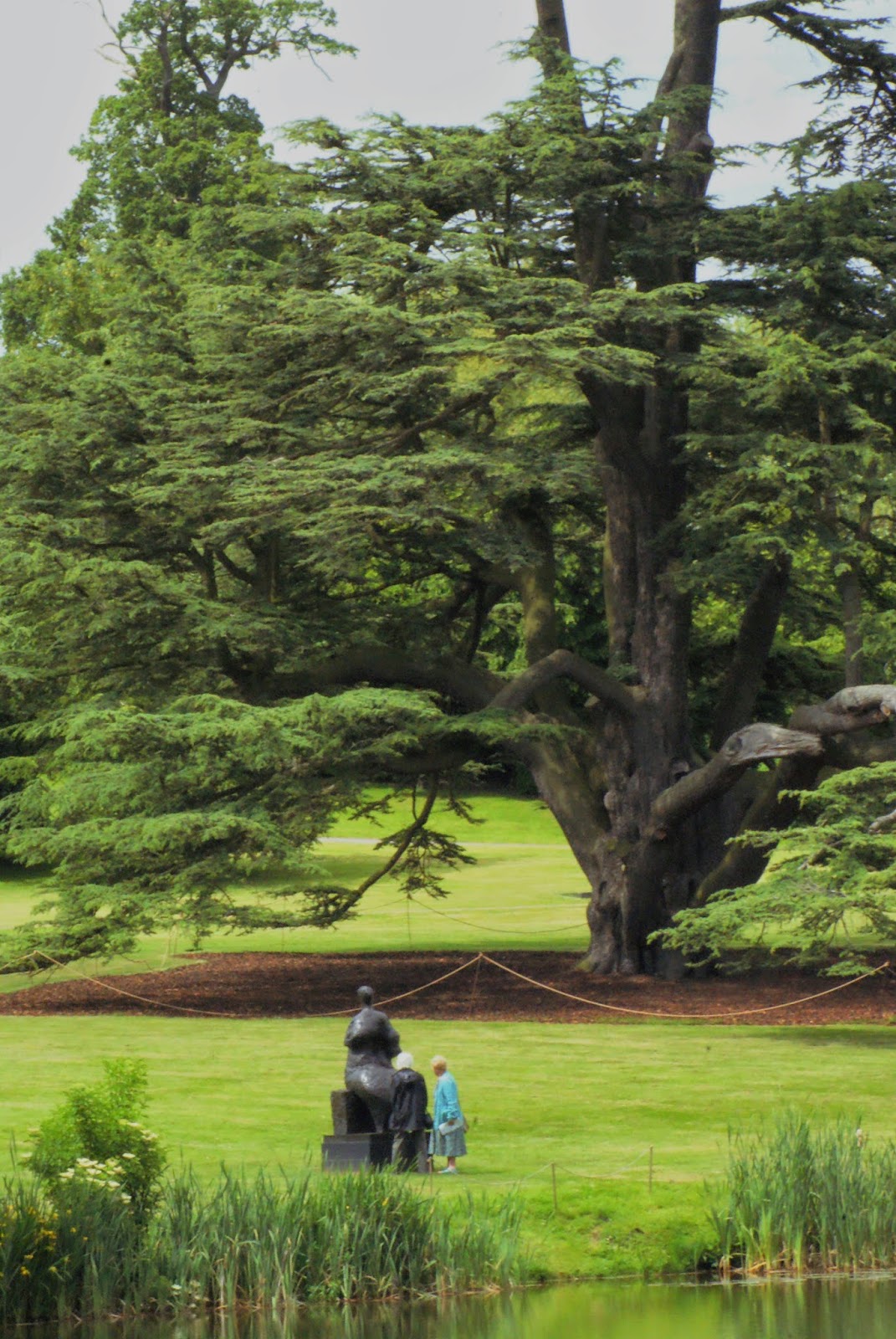 The Cedar of Lebanon tree is a mature example, believed to have been planted in the second half of the 18th Century during landscaping by Lancelot 'Capability' Brown. Situated in the centre of the front lawn, it is a fine specimen indeed, but for the odd snapped branch and open habit.

Time has on the whole been kind to this tree, although its prominent position has ensured much attention and close up inspection. This in addition to years of mowing with heavy machinery, and its heavy clay situation has meant compaction of the soil across the root area has been an issue. 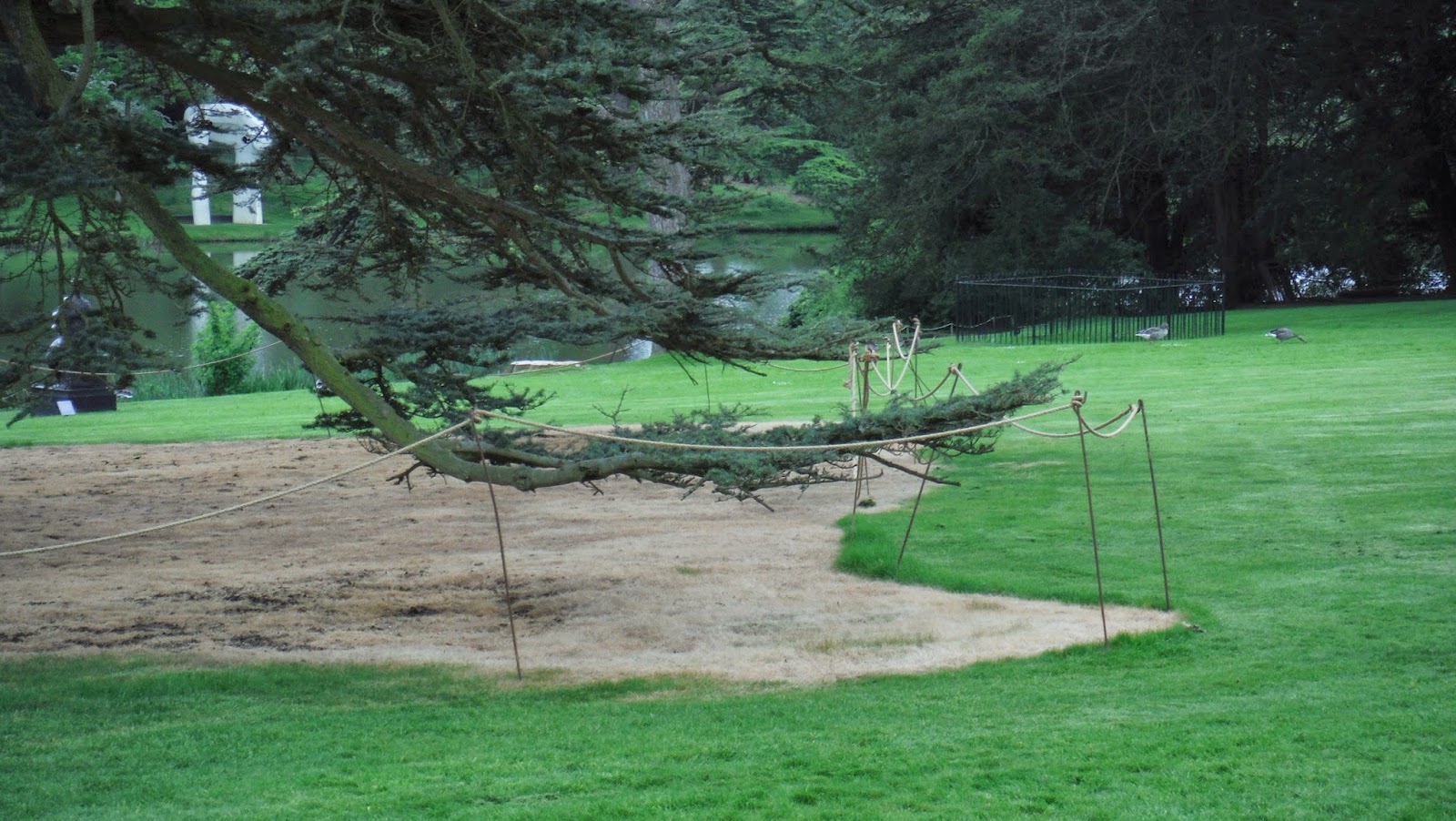 This year however we were glad to receive some funding that allowed some renovation work to be carried out. Previously, we had the foliage lightly pruned throughout the canopy to reduce the sail and snow holding effect of the largely flat or tiered branch network - this is often a problem where heavy snow can snap branches on the midst of winter.

Now however, we have gone a step further and reduced compaction around the root zone with a company that uses a 'terravention' machine. This quite effectively breaks up the soil to around one metre in depth at a number of points beneath the tree. A seaweed feed was introduced, along with a loose fill aggregate to help keep those fissures working - allowing exchange of air and water. 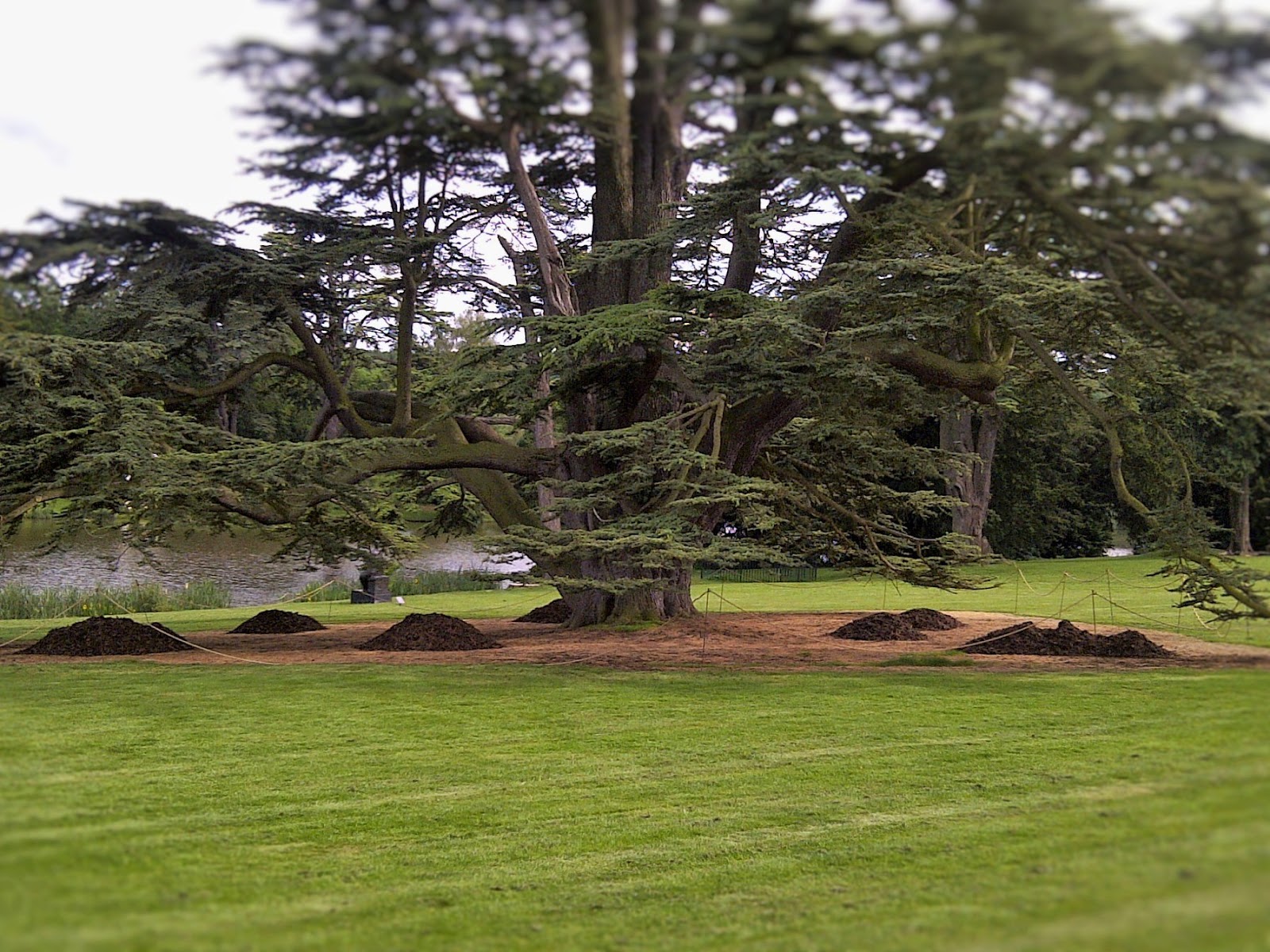 It may be wishful thinking, but there appeared to be quite some vigour to the new foliage in the weeks following treatment, although it has been a very 'green' year for most things due to the mild temperatures and rainfall here. We followed up the aeration work with a good mulch across the whole surface area beneath the root zone, in an attempt to improve the general habitat and stabilise moisture levels.

A serious amount of physical effort has been directed towards this tree this year in the hope that we might be able to extend its future. The works have been significant, and I must admit to being quite anxious that we didn't cause stress or injury to this special tree, so of course much research and advice was taken. 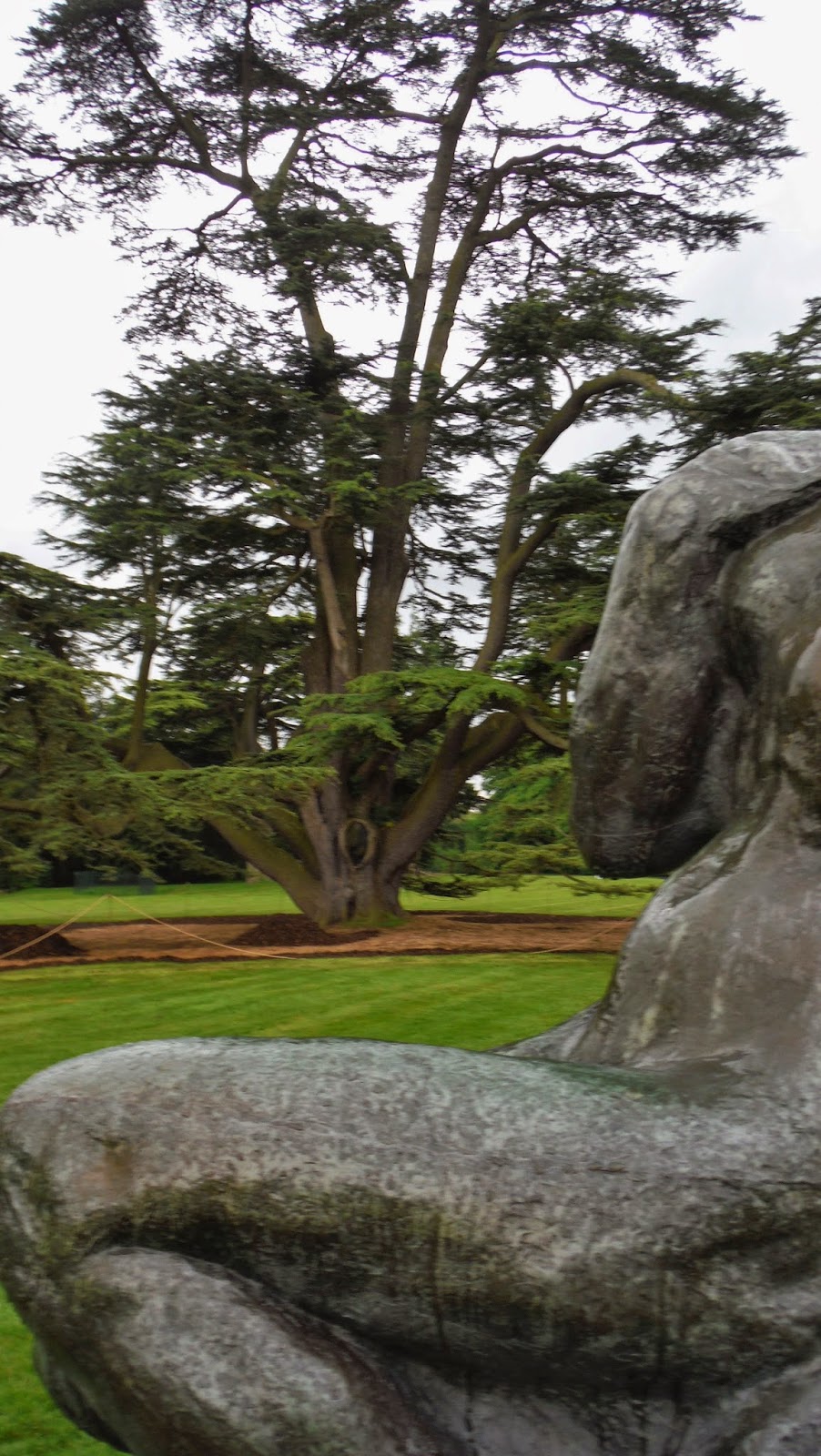 The work is, but for the mulch largely unnoticeable, and in no time will be forgotten. But, I'll be able to rest assured that I, with the help and funding of others did the best I could. Long may the tree remain the statement tree at Compton Verney, and thanks to Lancelot and an unknown gardener for planting it there in the first place - an inspired decision! (The tree's approx 240 years old btw) 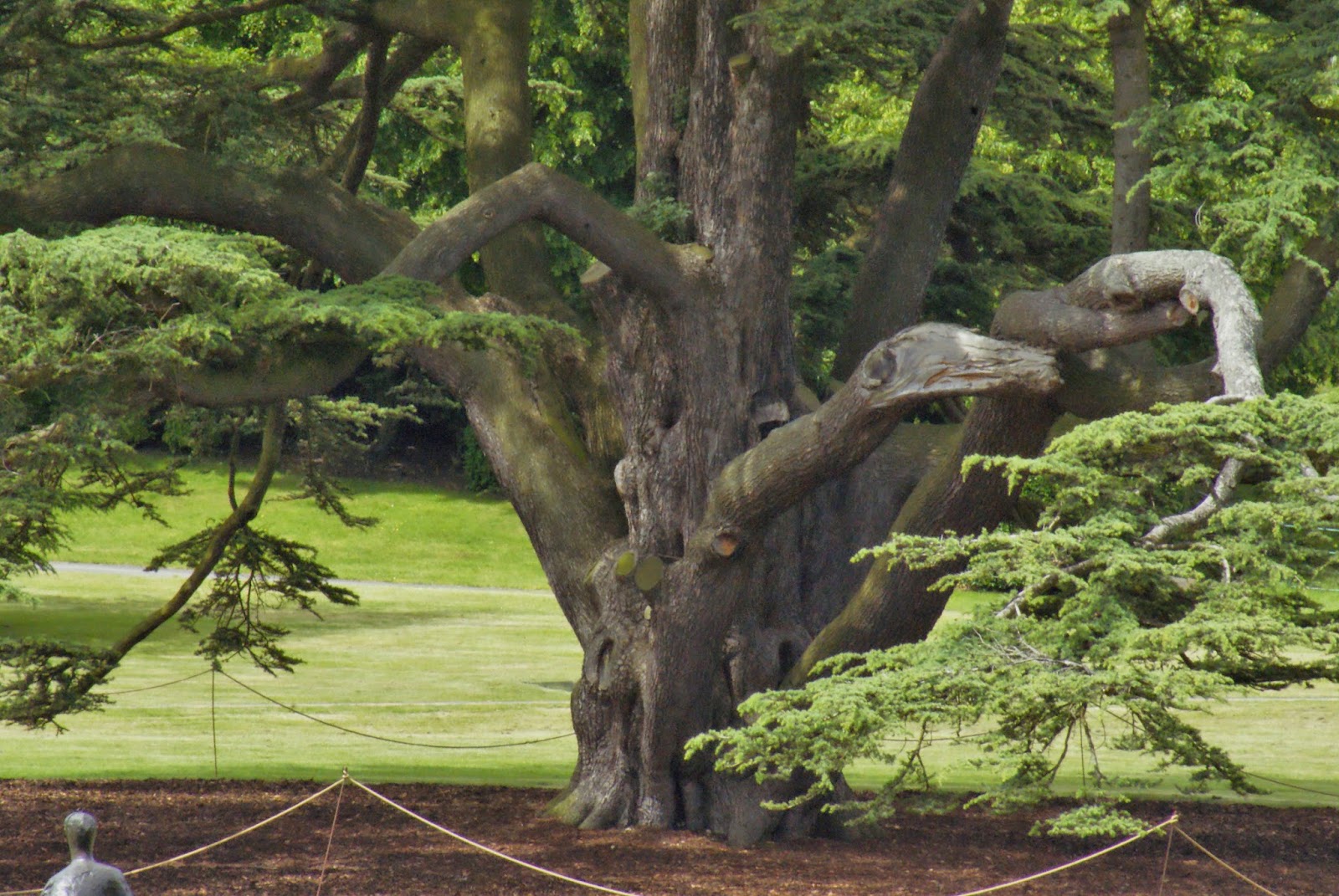 Thanks for stopping by, now checkout some other tree followers - click this link
Gary
Posted by Gardener Gary at Tuesday, September 02, 2014

It's simultaneously satisfying and deflating when you make an enormous difference to something but the work itself hardly shows. Will there be a notice to explain what's been done (cos it is interesting) or would that be inappropriate and intrusive?

How much longer do you think the tree will now live?

Have not checked out your post before on this tree...
What a stunning tree, so glad you can do work on it, which means it will be around for many more years to come. There is something special about a large tree like this...
Amanda xx

That is a magnificent tree! Thanks for the photos.

fascinating to read about the maintenance of this spectacular cedar not only in its topsail but at its roots. Must be such a boost to the tree after such impaction

I think tree maintenance is absolutely fascinating, and it's so interesting to hear what can be done nowadays. I've read something recently about the rejuvenating effect of getting oxygen to the roots (now if only I could remember where that was...). Glad to hear Compton Verney treasure their statement trees, unlike some I could think of.

A magnificent tree. I planted a Cedar of Lebanon 15 years ago in a previous garden. I hope in years to come someone will be looking after it like you are doing with this beauty. And I hope they will love it and wonder who planted it.

Thanks all for the comments, for some reason I wasn't being notified automatically!
Lucy, there is a temporary notice done & ready to go out actually, it will tell some of the story at least.
To all others, I'm glad to have done my little bit for this particular tree - all of them are uniquely individual, but collectively amazing! Such a special place :)

Good work. Old trees are worth the effort.