Stowe - Gardening on the grandest scale

Unexpected, revealing and surprising are words that came to mind during a visit yesterday to Stowe Garden, a major National Trust property in Buckinghamshire. The aim of the day was to meet the head gardener and his team, and also to learn about The New Inn, the latest and greatest building restoration project to be completed there in time for spring 2012.
I was completely thrown on arrival, as the location for the New Inn is a long way from the old visitor reception, but the less grand country lane approach was much more fitting and entirely appropriate – as I was about to learn. This new visitor reception, as it happened had an interesting history, being a venue created in the early eighteenth century by Lord Cobham to welcome Stowe’s earliest, if less wealthy garden visitors. Back in the day, invited guests, those with aristocratic connections of course, would likely have stopped in the impressive mansion by invitation. The New Inn, now as I’d assume then is convivial and welcoming, and I felt worth highlighting in this blog.

﻿
We learned of the ruinous state the building had reached and, considering the years of neglect it had suffered, just a handful more would surely have put it beyond salvage. Saved it has been however, and faithfully rebuilt to once again act as a portal to the garden at Stowe. I though it was so good, I’d go as far to say it could become a destination ‘inn’ itself! (Apologies…) Seriously, its new manifestation as a visitor reception venue could easily mask its own identity as a building in National Trust ownership worth visiting in its own right - it has evolved from a wreckage site to a beautiful and welcoming inn with rooms packed full of authentic artefacts and engaging materials, just like any historic property worth its salt.﻿
﻿﻿
Many people on arrival would I am sure be focusing on the wonder of Stowe just a short walk beyond, as it is one seriously great and influential landscape garden after all. The New Inn building has however been very carefully designed to provide an equally enjoyable, though somewhat less grand experience in its own right – it appears that in early times, the inn wasn’t exactly known for its luxury accommodation, with overnight guests not enjoying the best quality of board or bedding! 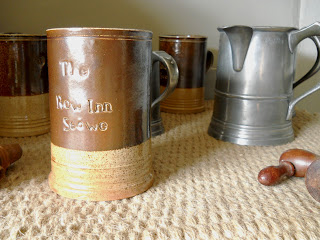 Once the whole situation is understood, it seems in hindsight very appropriate to be met and introduced to the gardens via this inn, as many people in the past would have been. The open rooms welcome you to explore some of the quaint building, which has genuine and tactile features, there’s even a food production garden beyond the back door. There are none of those prickly teasel flower heads to keep you off chairs, and no ropes to keep you at bay. Conversely; authentic cloaks await trying, copies of early guide books await a flick through, and I was very tempted to try on a tricorne hat while leaning on the mantle holding a clay pipe and tobacco – heaven knows I’ve dug up so many fragments of clay pipe over the years, it was nice to hold a complete one for a change! Artefacts found during the restoration are on display, including some very early roof tiles which were inscribed during moulding with some text which leaves us in no doubt as to the changing moods of tile makers! 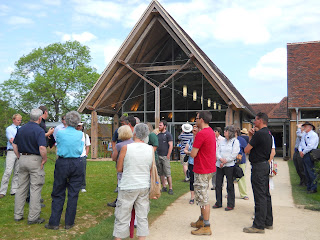 Much of our morning was spent learning about the New Inn, but as any proud head gardener would, Barry Smith used the opportunity to explain more about his much-loved Stowe. Some of a recently produced DVD was played where Richard Wheeler, a Garden Historian linked with Stowe unravels the mystery behind the numerous garden buildings, their meanings and reason for being. I think a number of us were so impressed we still bought a copy on the way out, which for thrifty gardeners was quite a challenge.
I won’t try to describe the vast garden itself, which we enjoyed through a tour to selected areas by Barry and his team. Suffice to say, that we were treated to fascinating mini talks at key locations, where much was learned about the thinking and processes behind restoration of the garden at Stowe. So much has been achieved and whilst many more challenges are ahead, the whole is coming together beautifully. The garden team shared information and stories freely – it was a real delight and quite refreshing. 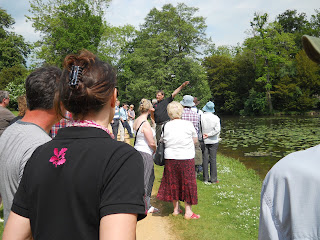 We enjoyed sunshine glinting across the surface of the lakes, wild and cultivated plants blooming in the designed wilderness areas near Gurnet’s Walk, and a light footed gardener dancing along a felled tree along Bell Gate Drive – honest! Latterly, just as some of us were feeling the pace, a darkened thundery sky encouraged us back towards the inn, but not before we streamed across the Palladian Bridge, illuminated in all its splendour by the strong, if fading sunshine. A fascinating visit was, as they say, enjoyed by all, all credit goes to Barry and the Stowe team for hosting the day.
﻿ If you’re undecided over landscape gardens, and many people are convinced they aren’t gardens in the true sense, then I’d urge you to visit Stowe if no other. It is a garden full of political and emotional meaning, where points are being proven and everyone who passes over the threshold can be challenged and stimulated into thought. For me, whilst I have much yet to understand, it is now starting to make more sense, and is less of a walk past some nice views and buildings, and more of a journey, which in itself is fascinating. The New Inn now provides the perfect welcome and start to your Stowe visit, and I’d be interested to learn which path you select for your trip around Stowe, and what you make of it – do let me know.

Flickr Photo Set - Stowe Gardens May 2012
Information about Stowe and the New Inn
An earlier post about Stowe
Posted by Gardener Gary at Thursday, May 31, 2012